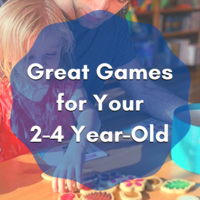 Great Games for Your 2-4 Year-Old
View

Games to Incorporate into your Virtual Happy Hour festivities
View 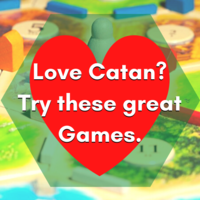 Gorgeous box art isn’t the way to judge the quality of a game, but it certainly doesn’t hurt! Oceans is a board game from North Star Games where you evolve a handful of species in the ever-changing aquatic ecosystem of prehistoria. It is great at two players, and can go up to six.

In Oceans, each beautifully illustrated card represents a “trait”. Your turn begins by adding a trait to one of your species of marine life. The abstract nature of the traits means you never simply have a squid, but rather a “bottom feeder that shoots ink to protect itself.” This abstraction fuels the mind with inspiration as you envision your colorful creations floating through the reefs.

After playing a trait, you choose one species to feed - either from the reef or upon another species at the table. The reef is easy to graze from but has a limited supply, so not everyone at the table can eat from the free buffet for long! Also, while some of your species may be carnivorous, you never really antagonize your opponents. That fact that your species are never actively destroyed by your opponents makes this game much less cutthroat than I feared, and gives the game a leisurely feel that is easy to enjoy.

I liken Oceans to Ticket to Ride because the process is similar. You gather a hand of cards, making plans for what you’ll do in future turns, only to have your opponents’ actions force you to adapt. And it’s this adaptation that makes this game phenomenal. You react to the other species at the table just like creatures themselves develop over time. It is a perfect blend of mechanics and theme.

You might begin with a species of speedy fish that feed from the reef. Your opponent creates a predator who feeds off of your fish. Seeing this, you create a new species of fish that cleans the teeth of your opponent’s predators. Soon your table is exploding with diverse life!

You may optionally play with the “Deep Deck”, a stack of cards that offer wildly imaginative traits that make every play of Oceans unique. You may start playing Deep Cards, such as “Leviathan” or “Bioluminescent”, halfway through the game. Once everyone knows the rules, I highly recommend using the deep cards.

If you’re looking for a unique new game with light strategy, immersive theme, and stunning artwork, check out Oceans!

Who would enjoy Oceans?