Fair Game Staff pick out our favorites from Kamiagawa: Neon Dynasty for Magic the Gathering.

Kamigawa: Neon Dynasty is getting a lot of Magic the Gathering fans excited! The new avenue of science fiction theme and 80s style is a very novel inclusion into Magic's traditional high-fantasy settings. There's a lot to love about the cards as well, and we've got the low-down from two Fair Game team members on what they were most excited about from Kamigawa: Neon Dynasty.

I started playing magic long after the original Kamigawa block released, and to me, Kamigawa has always been a relic of the distant past, occasionally surfacing in reprints of cards like Imperial Recruiter or commander cards like O-Kagachi, Vengeful Kami. However, with the advent of Kamigawa: Neon Dynasty, Kamigawa returns to the forefront with a fresh cyberpunk spin. And with this set, just like any other, there is a fresh batch of cards that just might be strong enough for modern, legacy and commander, some of my favorite formats.

The Channel mechanic is a very, very strong mechanic. Uncounterable spells that can be played as lands in a pinch? And they don't even come in tapped? Sign me up! Boseiju, Who Endures is the star of the show in my opinion, with the others close behind. I expect Boseiju and Otawara to be played in many decks, but the others could see play elsewhere. However, I expect these cards to really shine in lands decks in legacy, and I think this may be just what was needed to put modern lands onto the playing field. 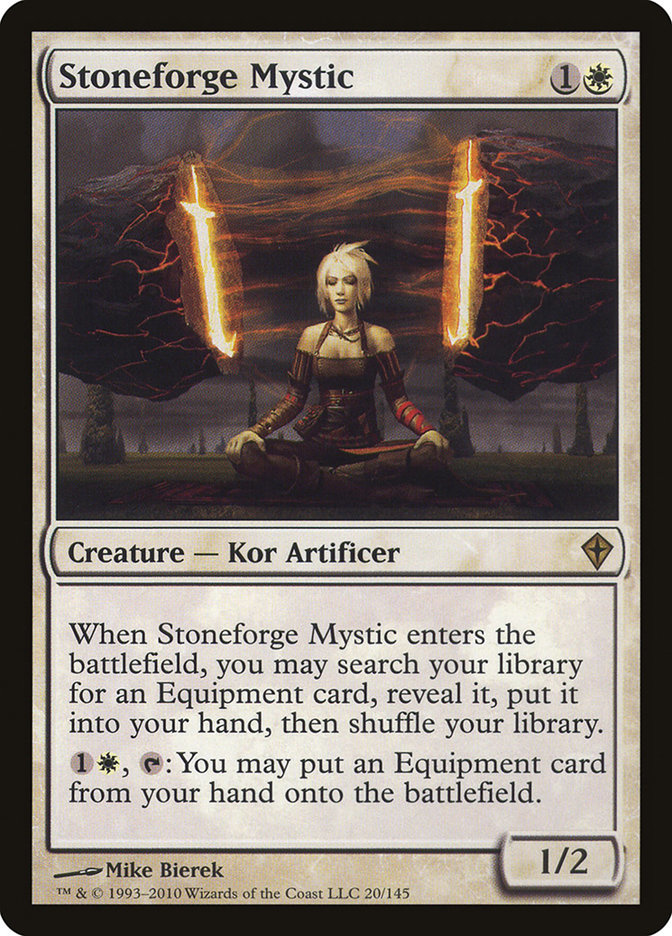 Stoneforge Mystic is my favorite magic card. And this card goes with Stoneforge Mystic like spaghetti with sauce. Being able to tutor up graveyard hate with SFM’s Enter the Battlefield ability, and then being able to “cast” it at instant speed, dodging counterspells along the way? Sounds good to me. Any deck that plays Stoneforge Mystic should include this in the sideboard, and a Yorion Stoneforge deck may even consider mainboard slots.

This card is the bomb. Pauper, pioneer, maybe even modern will see this played. Heck, there’s even a fringe ninja deck in legacy that might play this. Bouncing a 1 mana 1/1 for it to become a 2/1 and draw you a card? This is a very powerful tempo play that can be used in a variety of decks.

Champions of Kamigawa released October 1st, 2004, a few short weeks before I turned four years old. Suffice to say, I missed the original Kamigawa block, having first picked up Magic cards around the release of Gatecrash, in February of 2013. While I never experienced the first top-down set in its heyday, I did manage to catch what is widely regarded as the magnum opus of designing cards with theme and concept as the priority and not as an afterthought—original Innistrad. All this to say, the original Kamigawa block did not escape my attention.

As I grew as a Magic player, I quickly fell in love with the lore, and world-building Magic has done over the years (I am, as Maro calls it, a Vorthos player, someone who cares about the flavor of the cards). As I only ever experienced it secondhand, the mythos of the original Kamigawa has always been alluring: a world so vibrant and built with passion, but left by the wayside as it didn’t appeal to many players at the time. Being sandwiched between the original Mirrodin and Ravnica blocks certainly didn’t help things either. 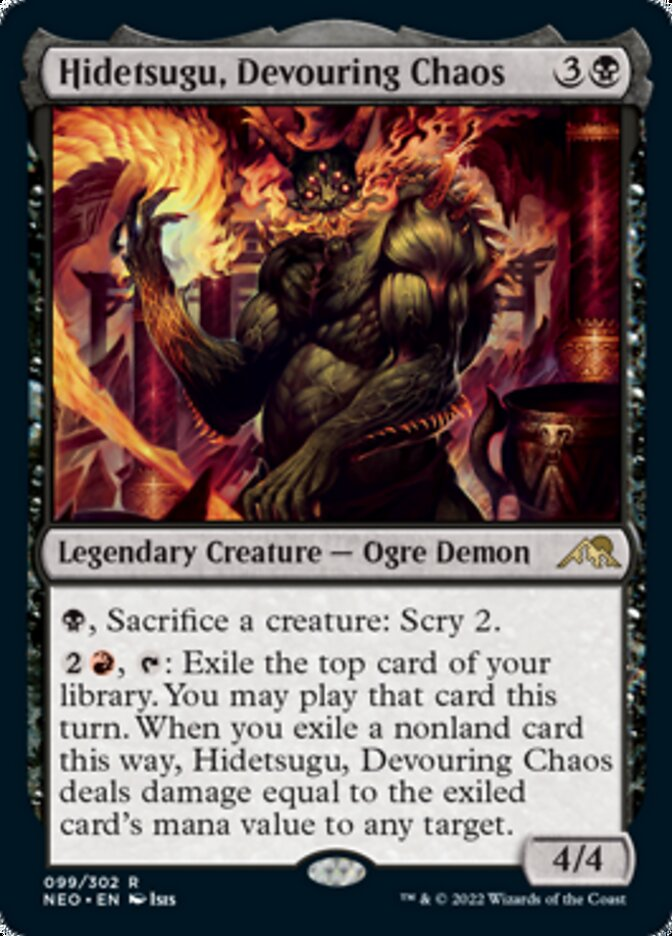 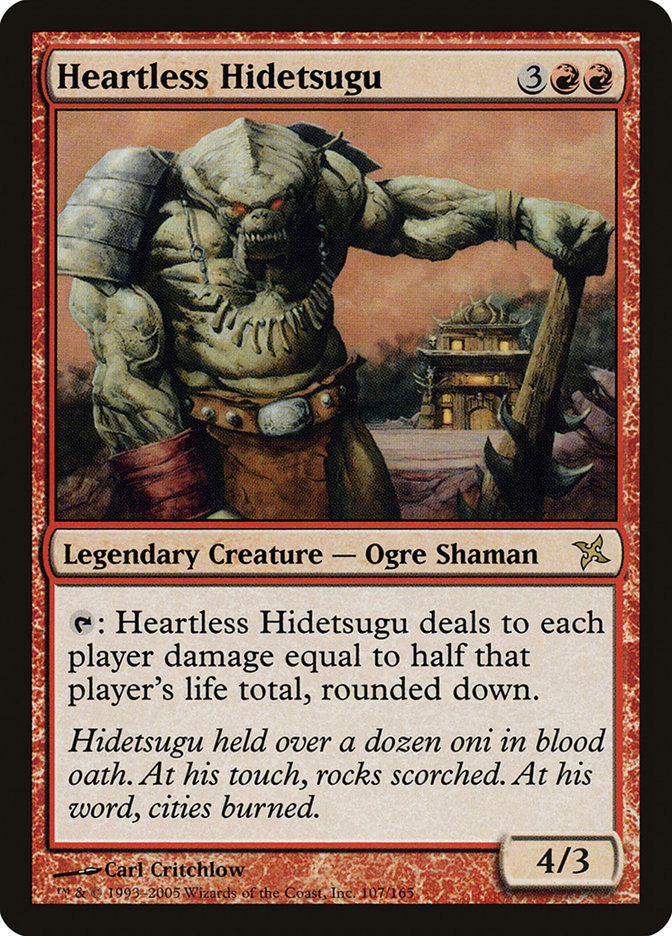 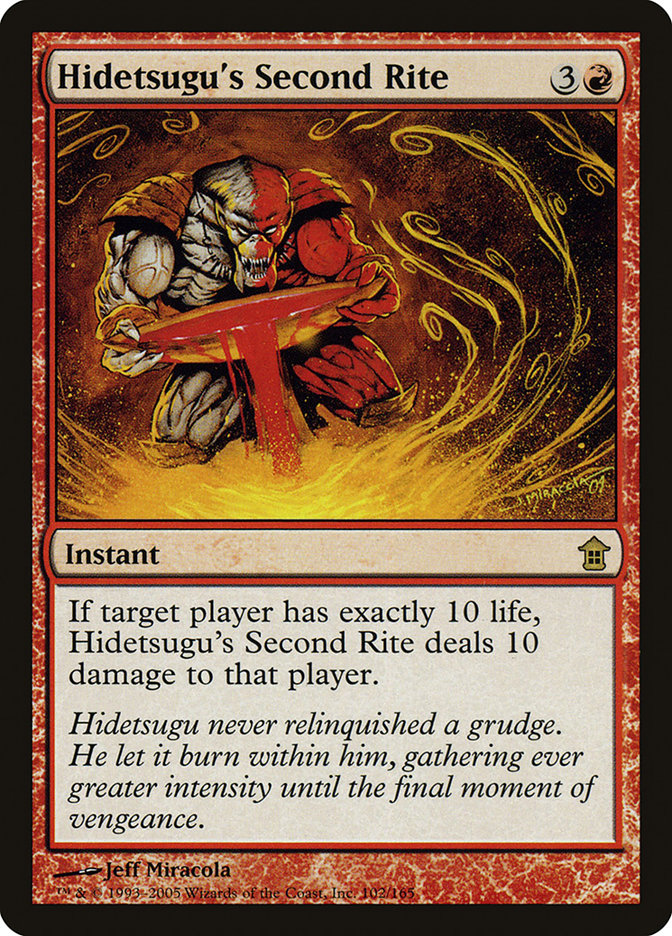 The original Hidetsugu earned his reputation in the early days of commander as a game-ending threat sequestered away in the command zone, ready to spring out at any time and quickly close out games; the new Hidetsugu is Red-Black’s new design space to a T. Sacrificing creatures to gain card advantage (of sorts)? Check. Exiling cards off the top and being able to play them/deal damage to a target? Check! A 4/4 for four, with no downside other than the legendary typeline, Hidetsugu, Devouring Chaos promises a value train that is both a threat and an answer. Perfectly slotting into my Prosper, Tomb-Bound commander deck, the Ogre promises to both the playgroup and the plane that he’ll be a threat as long as he stays alive. 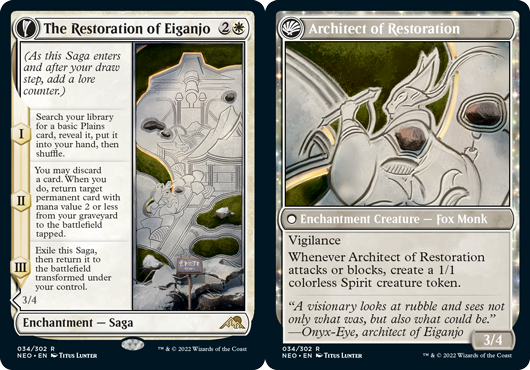 Certainly a step up from The Birth of Meletis, which was released just over two years ago, The Restoration of Eiganjo // Architect of Restoration is a powerful value piece that combines color fixing, actual ramp in white, graveyard recursion, and continuous token generation on a 3/4 with Vigilance. Being able to discard a card with the second chapter, and then immediately reanimate it when the trigger resolves is fantastic. It is certainly a threat in limited, and in constructed I think The Restoration of Eiganjo // Architect of Restoration will be popular across multiple formats.

Ever since Vizier of Remedies was printed in 2017, the “Devoted Vizier” combo has been widely popular and played heavily in the Modern format. Swift Reconfiguration is a part of the UW Vehicles Commander Precon deck for Kamigawa: Neon Dynasty, and perhaps it’s finally time for the “Devoted Vizier” deck to migrate over to the Legacy format. With Swift Reconfiguration turning Devoted Druid into an artifact, you can generate infinite green mana as though Devoted Druid had haste. A popular outlet for this combo in Modern is when you use Duskwatch Recruiter to find Walking Ballista (and more recently, Heliod, Sun-Crowned) to quickly close out the game in one turn. Whether or not this shell is good enough for Legacy is still to be seen, but it would at least make for some good stories.

We've had a blast drafting Neon Dynasty on Fridays in Downers Grove, and we play Commander every Monday (La Grange), Wednesday (Downers Grove), and Friday (La Grange). Be sure to join our mailing list to hear about our exciting unique events and preorder information.