Last week, we talked about why a Magic the Gathering Prerelease event is one of the best experiences in all of tabletop gaming. They are awesome, and you should join us for one.

This article will tell you everything you need to know to get ready for a Prerelease event and help you have a great experience.

At a prerelease event, each player builds a deck from a handful of booster packs. This way of playing is called "Sealed" and it creates an even playing field for everyone - each player gets the same number of packs from which to build their deck, so no one can simply pick out the best cards to build their deck from. Then, players play three rounds of games. In each round, you will be paired up with an opponent and play best-of-3 games. 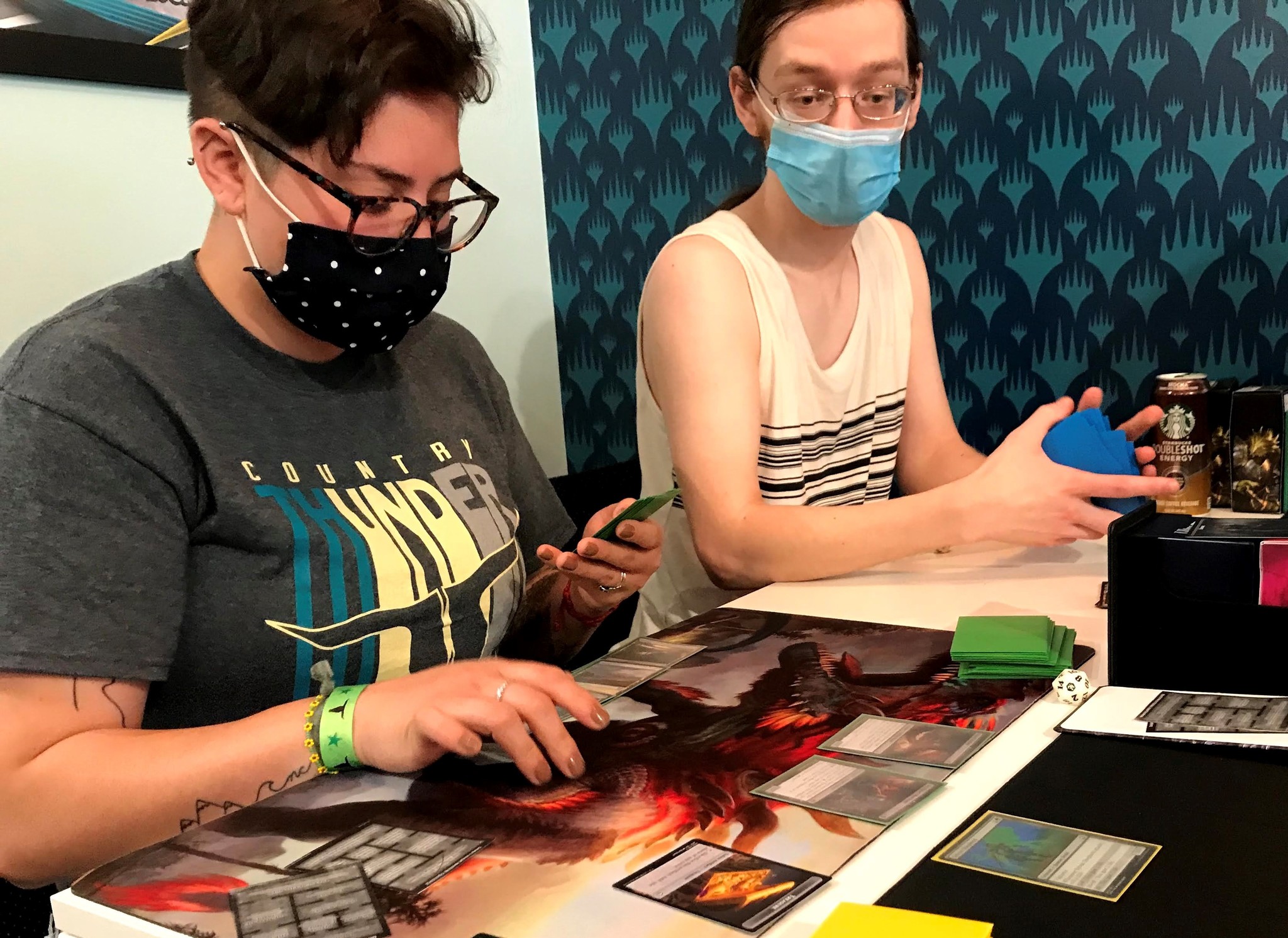 Here are a handful of things to keep in mind while at a Prerelease event.

As with anything, your attitude will affect your experience. Come into the event with a positive attitude with a goal of having a lot of fun. It’s not about winning (or losing), but the fun of playing games, meeting new folks, and enjoying an enriching world portrayed through the cards.

You should expect the same level of sportsmanship from your opponents as well, and we at Fair Game want to do everything we can to encourage this kind of positivity at our gaming tables.

Regardless of if you’re new or very experienced, you are bound to encounter something new at a Prerelease. All these cards are brand new and this is the community’s first exposure to them. Everyone comes in with an attitude of learning something new.

If you have rules questions, ask. Need help understanding a card? Ask. Not sure the best way to build your deck? Ask about that too. 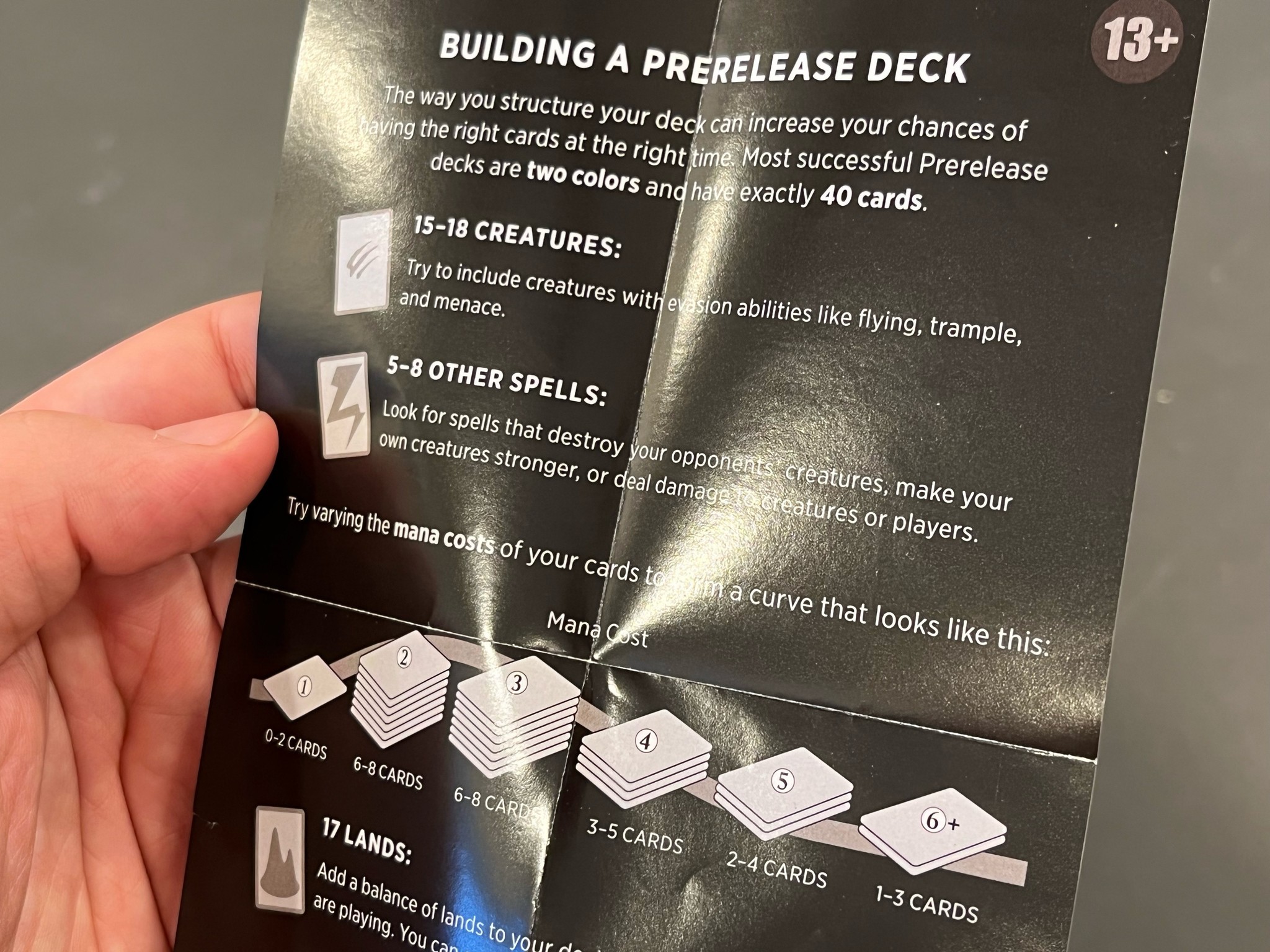 Each Prerelease Kit includes an insert with suggestions on how to build your deck. This is a great resource and you should do your best to stick to most of their guidelines:

Again, feel free to ask lots of questions about the best things to include in your deck.

Build Around Your Rare Cards

In your prerelease kit, you will get about 7 rare cards, 18 uncommon cards, and 60 common cards. The common cards are typically very simple and designed to be universally useful but low-powered.

The rares are the opposite: they are usually much more specific to the kind of deck they shine in, and much more potent. If you have multiple rare cards that can all go into the same deck

Because rares are typically stronger cards than the uncommons and commons, it is a good idea to include as many of them as possible in your deck. I tend to look at my rares and see which colors are most represented as a starting point.

After that, I will look at my pool of uncommons and see which ones of those will go well with the rare cards I selected. Usually this means matching colors, but also cards that have similar or related effects. Then I do the same with my commons. 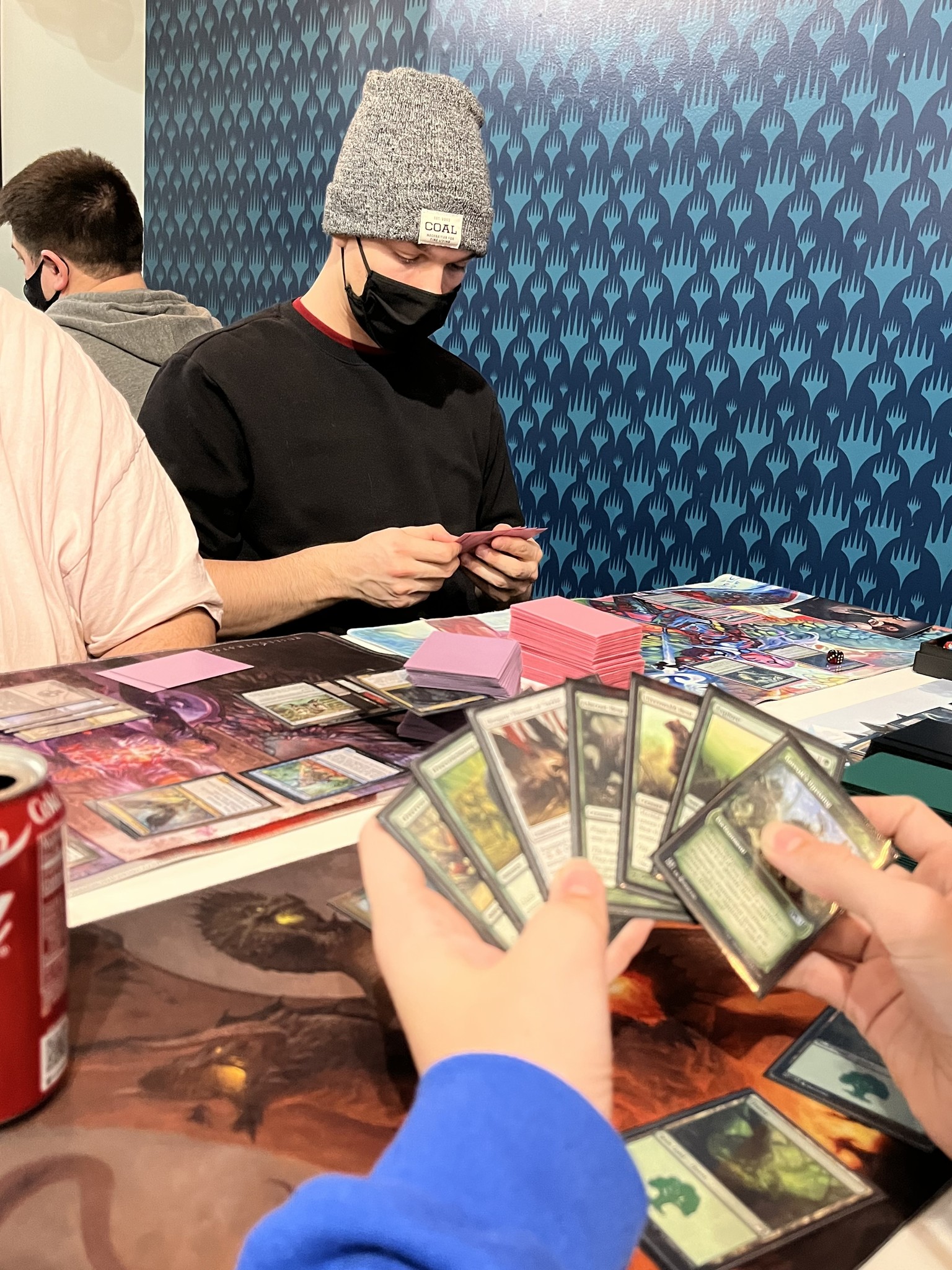 One of the most important aspects of building a Magic deck - and one that is most often forgotten about - is having ways to foil your opponent’s plans.

Most typically, this comes in the form of “removal”, or the ability to remove your opponent’s cards outside of attacking. Each color does this in different ways: direct damage, having a creature of yours attack a creature of theirs, or pacifying a creature so that it can’t attack or block.

While you definitely want ways to remove enemy creatures, a couple of cards that destroy enchantments and artifacts are a good thing to have as well.

Blue will also have counterspells - spells that you cast in response to your opponent playing a card to cancel that card entirely. These are a good way to throw a wrench in your opponent’s plans, although it can be tricky to know which cards to counter. Usually anything expensive is a safe bet.

I would argue that you really can’t have too much interaction. I try to have as many as 6-8 if possible; your packs might not have that many cards as an option, however. 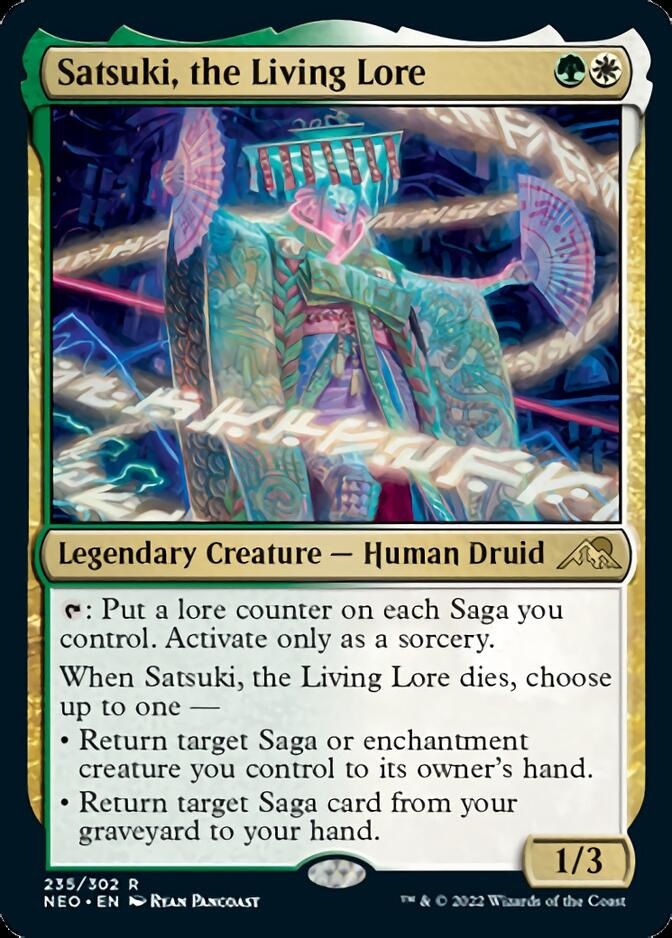 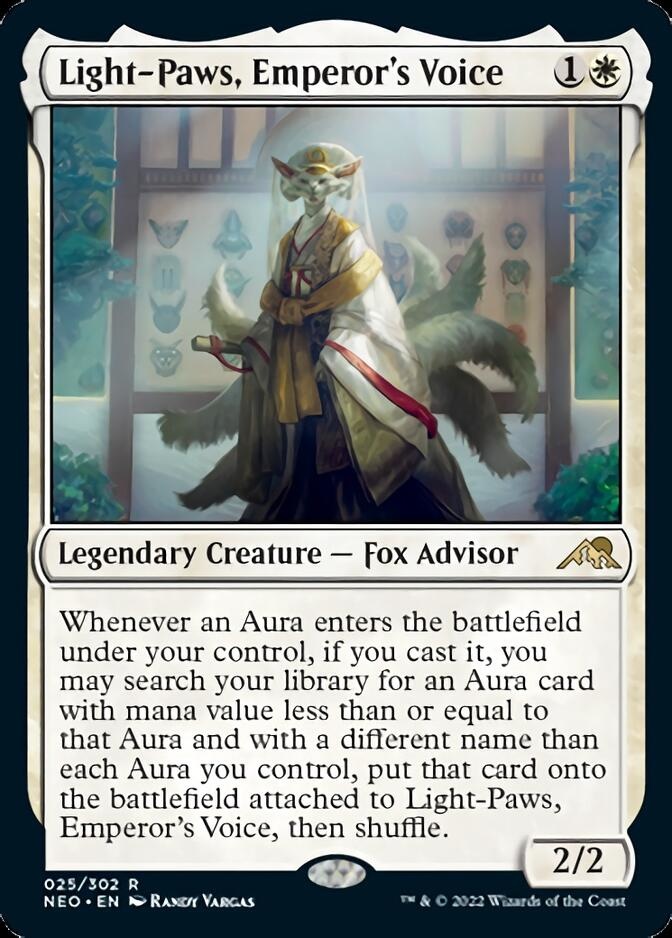 Let’s look at an example: I like the look of Satsuki, the Living Lore and she gives me some clear direction: she returns enchantments back to your hand, and specifically wants you to have Sagas in play.

I also have another rare that’s worth looking at: Light Paws, Emperor’s Voice. Light Paws rewards you for playing Auras. As I look through my cards, all of my Sagas and all of my Auras are enchantments. So there’s an overlap there, and I decide I’m going to try building a deck with a lot of enchantments.

I choose green and white as my two colors. I have a green Saga, a white Saga, and 3 white Auras. I also have a few enchantment creatures (which count as enchantments as well as creatures) so I choose to add those in as well.

At this point, I have 11 cards in my deck so far. That’s almost halfway to the recommendation of 23. 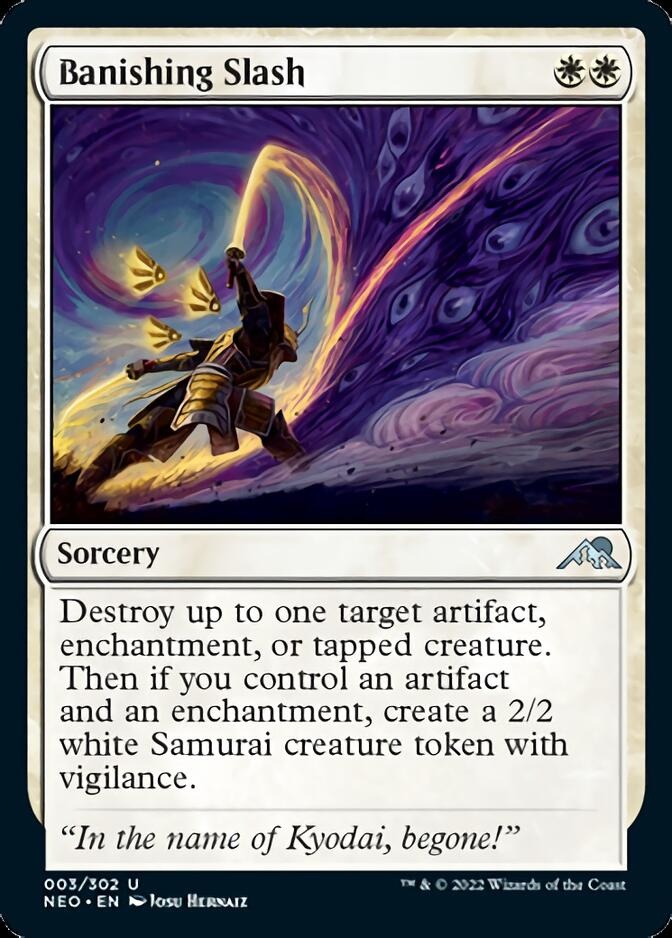 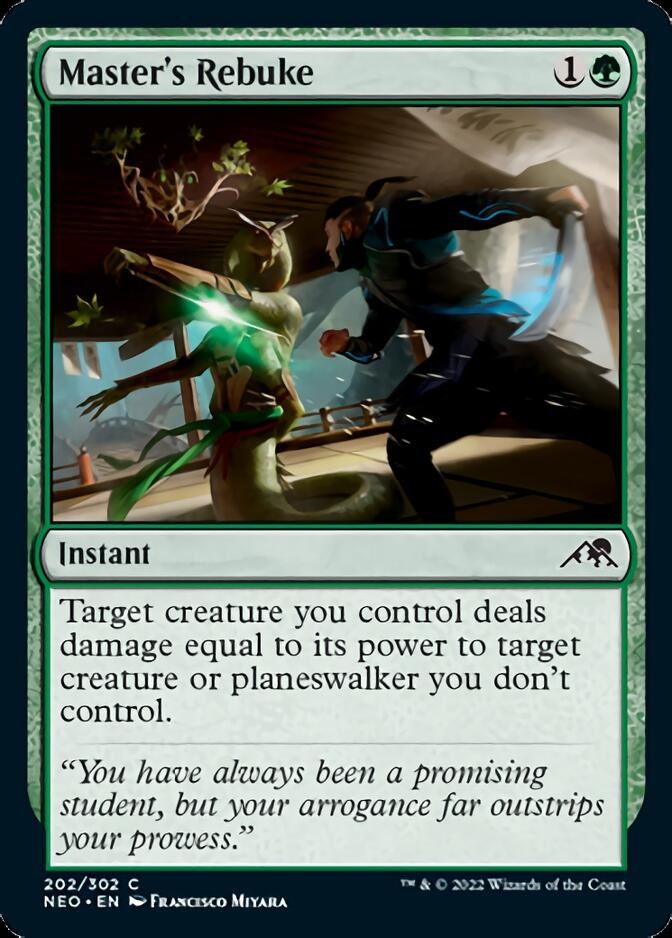 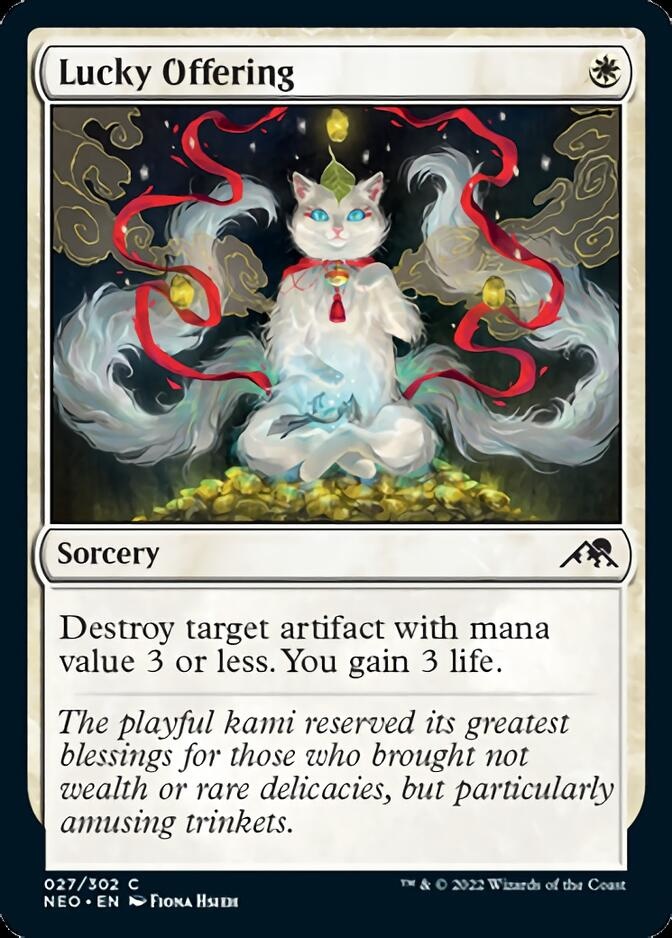 Next, I look for “removal” options. I find a handful of effects that remove your opponent’s cards. With these 5 added, I am at 16 cards.

I don’t have very many creatures so far, so I fill out the rest of my deck with creatures. You are allowed to make changes between rounds, so I can always swap in more creatures if I need to.

That seems like as good of a start as any. Now to shuffle it up and see how we do. Wish me luck!