As indicated by the recent heat wave, Summer is here and in full swing. The days are longer, kids are off school, and it’s a great time to grill up some burgers and dogs while you hang out with friends. Once your bellies are full and you are ready to relax around a table, it becomes the perfect time for a party game. But what if you're tired of the same old Uno or Apples to Apples? Whether you want to laugh, bluff, think, or compete against each other, there is something fresh and fun here that your fellow party-goers will love.

Sometimes the simplest games can be the most fun. In Herd Mentality, players are trying to match up their answers to the rest of the group. For example, if the question was “Who is the greatest super hero” and 3 people wrote Batman, 2 people wrote Iron Man, and one person wrote Thor, then the 3 people who chose Batman would each score a point for being the majority. The person who chose Thor would have to take the Pink Cow token, since they were all alone in their choice. The goal is to be the first person to 8 points; however, you can’t win if you have the Pink Cow. So, make sure to keep your answers in line with other people if you can! 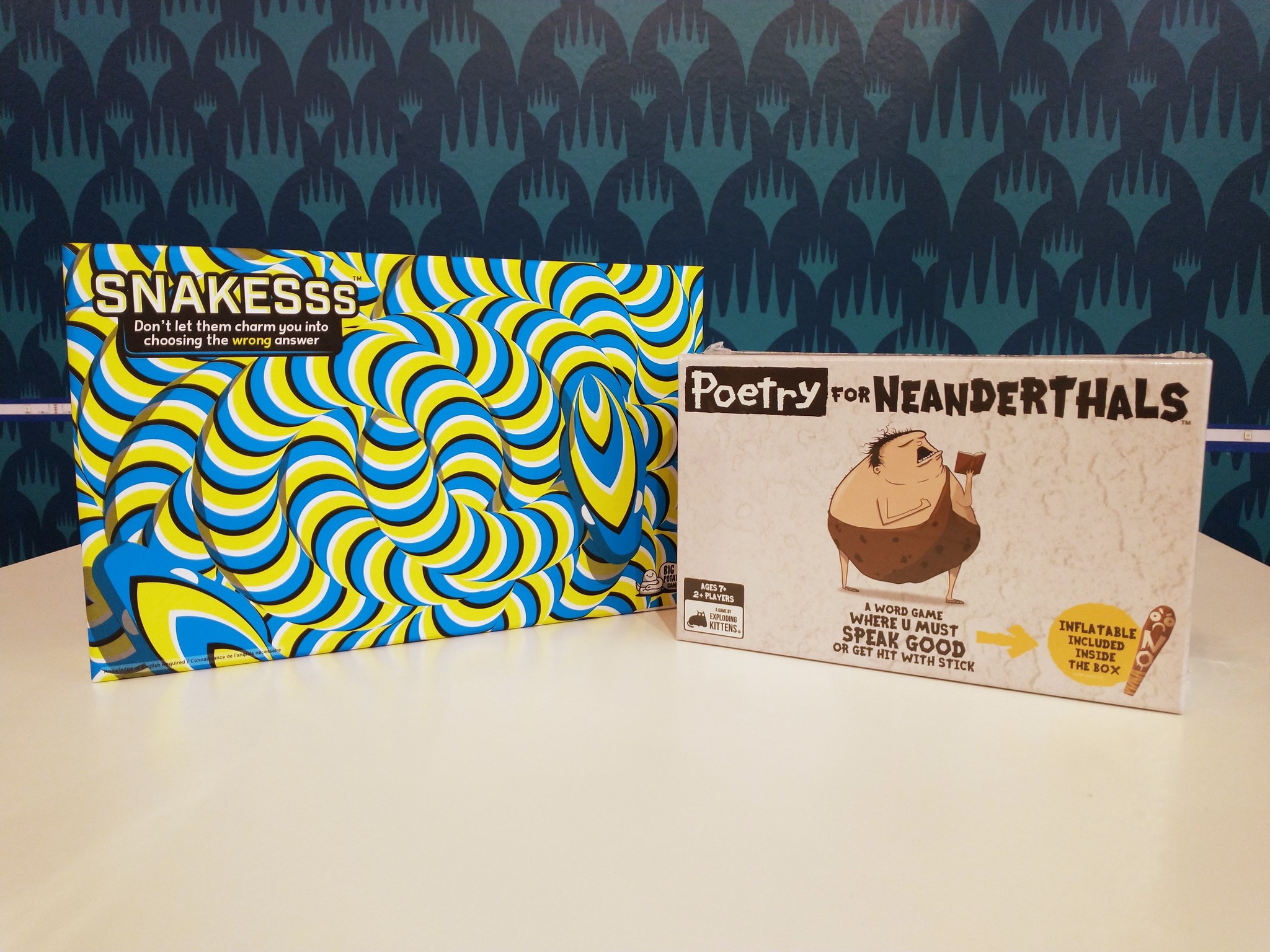 This is a hidden role guessing game where players have two minutes to work out the correct answer to a simple, multiple-choice trivia question. Sounds easy, right? Not so fast - a few players will secretly be snakes, and their job is to get the other players to pick the wrong answer. It’s a clever game because while the snakes will know who the other snakes are, the rest of the players won’t, so they’ll need to deduce who is steering people in the wrong direction. Accusations will be abound.

The first thing you should know about Poetry for Neanderthals is that you get to hit people who mess up with a giant, inflatable club. Not hard, mind you, but sitting there with a giant toy club ready to whack someone who is already under pressure is more fun than it has any right to be. Poetry for Neanderthals is a competitive word guessing game where you can only give clues with one syllable words. So, if the clue is “water”, you might say “the wet thing you drink to live”. If you happen to say a multi-syllable word (like “liquid”), then your opponent gets to bop you in the head with the “No Stick”. It hard to just talk in short words, but the word strings you make are sure to cause all of you laughs. It's a ridiculous amount of fun. 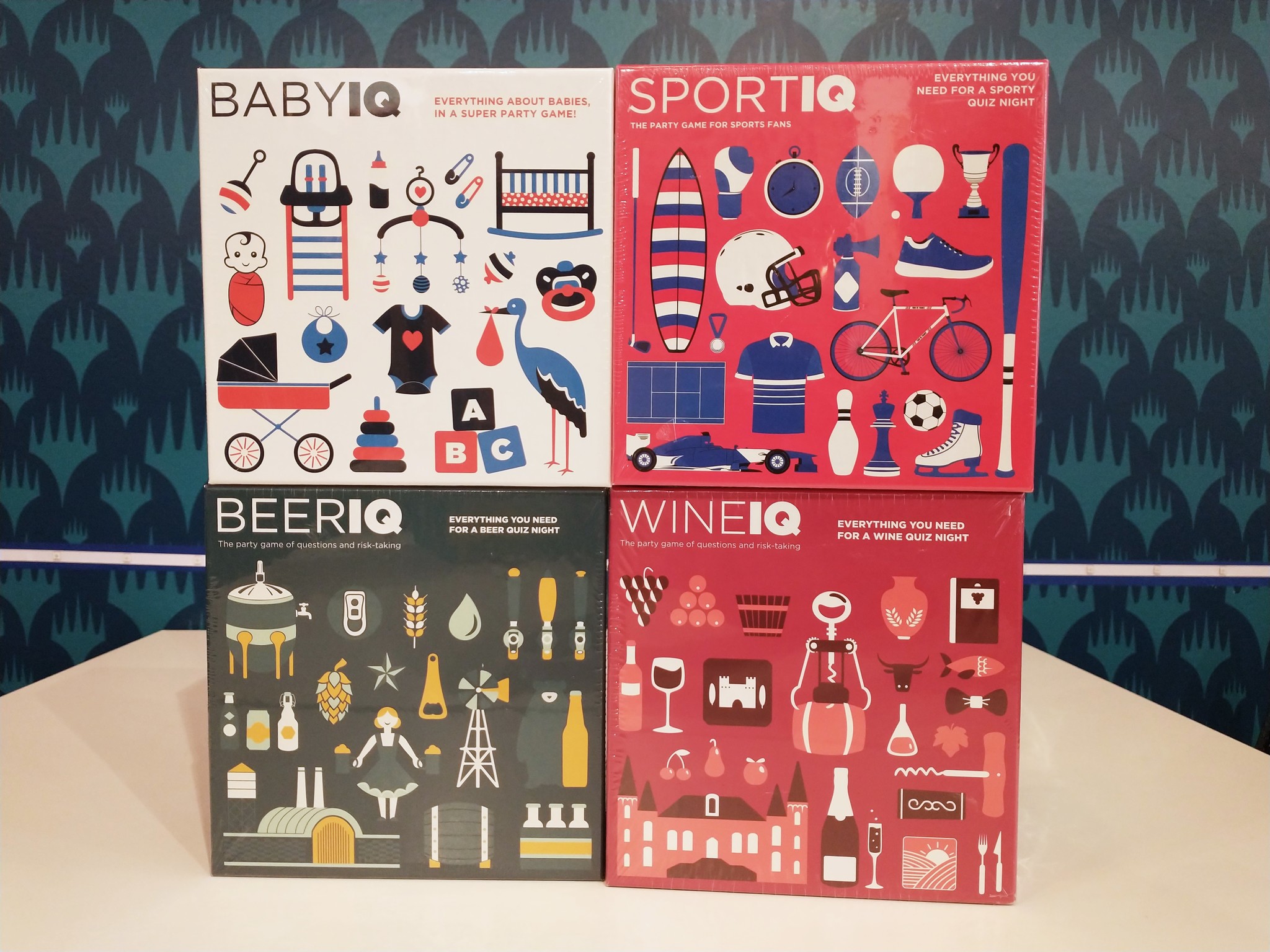 Publisher Helvetiq has created a line of trivia games centered around popular themes: BeerIQ, WineIQ, SportIQ, MusicIQ, and BabyIQ round out the line. In addition to being more topic-focused, these also play differently from your standard trivia games. Players will divide up into two teams and then take turns asking each other questions. Your team will earn points for choosing the correct answer, but can instead earn bonus points for answering the question without hearing the multiple choices. However, the real wrinkle comes in round two, which tests your memory. Your team will only hear a few words from questions from the first round and players must use their memorization skills to find the correct answer. If you ever wanted to test your IQ on one of the above topics, these games will definitely give you a challenge.

A game of simple and ridiculous challenges, Beat That is sure to create many moments of laughter. Over the course of ten rounds, players will use a variety of simple objects to attempt the games’ Minute-to-Win-It-style challenges. You might be trying to pick up a die with cups on your hands, trying to bounce a ball off a wall into a cup, or even having a paper airplane flying contest. The tasks in Beat That are simple enough that just about anyone can do them, but still creative enough for everyone to enjoy themselves.