Practice can be one of the best ways to reinforce spelling in your students and kids. But simply re-writing words from your spelling list is boring. Spice up your lesson with these great games!

Spelling is an incredibly important skill to teach our kids and students. Being able to write and communicate effectively is critical to success and conveying one's intelligence.

Teaching spelling is, unfortunately, a real bear. There's a thousand exceptions to a million rules, and at the end of the day, repetition is one of the best ways to actually instill correct spelling in our kids. But re-writing the same words on a spelling list over and over again can be mind-numbingly boring for students.

Below are two awesome games that you can use to reinforce spelling skills in your children, including ways to incorporate spelling lists in a classroom or homeschool setting. Games dramatically increase engagement and therefore retention, and we think you will find a lot of success with these two titles.

In this spin-off of Scrabble, players will try to use as many letters in possible in their ever-growing crosswords. This isn't a turn-based game; you need to race your opponents in real time to the pile of letter tiles in the center of the table. Bananagrams is a blast and is a great way to get kids (or adults!) of the same age and spelling ability to think fast and spell well.

My favorite version of Bananagrams is Bananagrams Party, which includes several event tiles with symbols instead of letters. The events do all kinds of wacky things, like steal letters from your opponents and "blow up" their words. It really adds an element of randomness to and excitement to an already great game.

One way to include Bananagrams in your curriculum is to give bonuses for spelling words on this week's spelling list. Those words could be worth double at the end of the game. If you're using Bananagrams Party, maybe you keep the event tiles separate from the rest, and players can grab one of them once they spell one of the current spelling words. Now kids are going over the spelling list a dozen times in their minds, looking for ways to spell those words.

Bananagrams is perfect for upper-elementary or middle school. The fast pace of the game ensures that games don't last longer than the kids' attention spans. 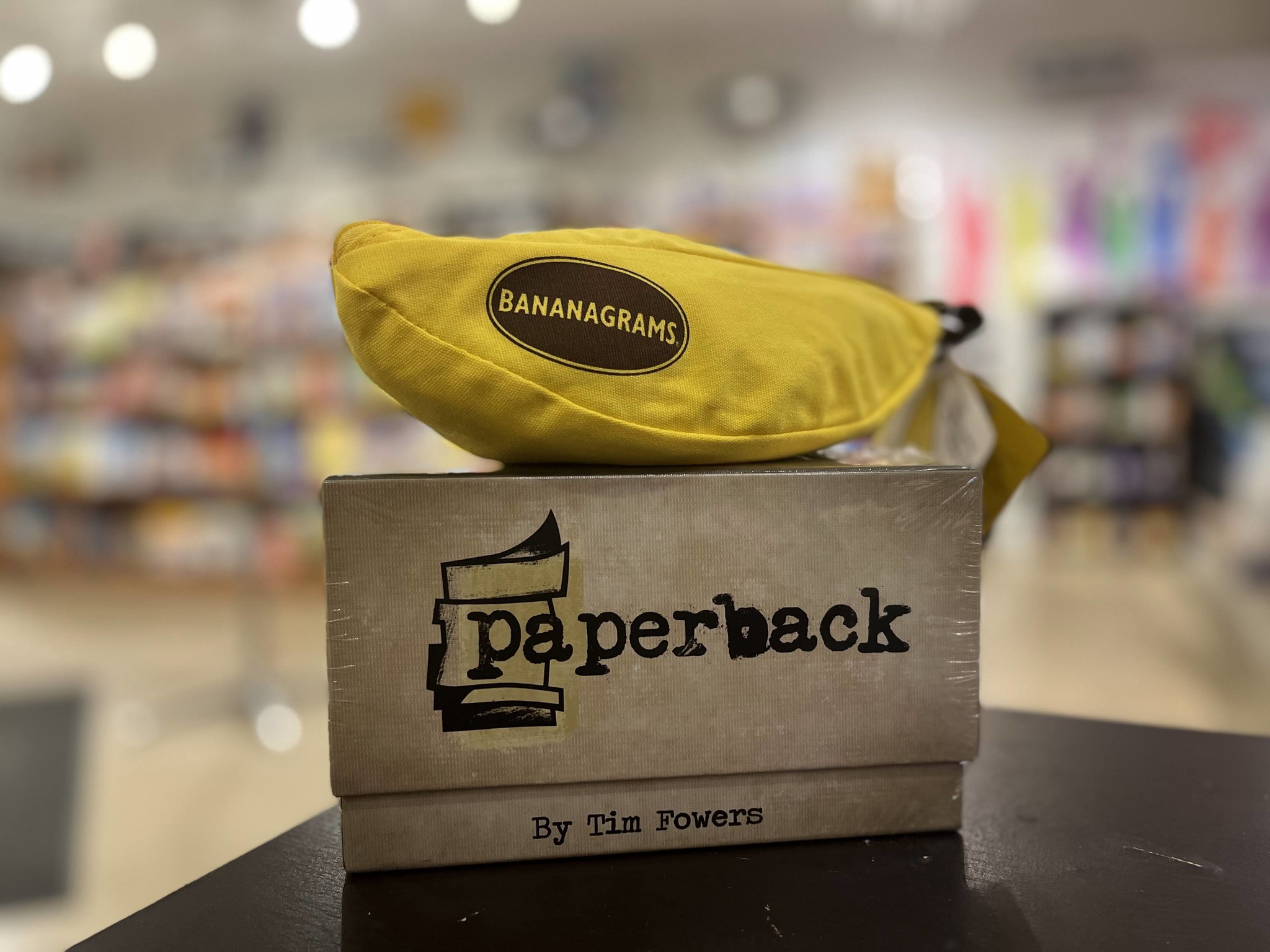 Bananagrams is all about the letter tiles, whereas Paperback is an incredibly clever card game. In Paperback, players are novelists who get paid by the letter, and they will try to spell the biggest and best-paying words to eventually publish books. The player with the most points from Publications wins!

Each player starts with a small deck of 10 cards. Half of them are Wheel of Fortune staples (R, S, T, L, N) and the other half are wild cards that can count as any letter. You will draw a hand of 5 cards and spell a word from them. When you do, you will be paid in cents for the non-wild letters you use, and can immediately use that money to "purchase" one of the letter cards in the center of the table and add it to your deck. As you draw through your deck, you will shuffle in the cards you have already played along with any cards you have purchased. This plays very similarly to Dominion or any other deckbuilding game, if you are familiar with those. There are some advanced rules that can be omitted; this will keep the games shorter and make it easier to learn the game (and thus get to the playing and learning more quickly!).

Many of the purchased cards have multiple letters on them, such as C-H or E-S. So while you still only have five cards in hand with which to spell, you can write longer and longer words, earning more and more money for each word. The goal is to build up to buying pricey Publication cards; the person with the most points from Publications at the end of the game wins. However, those Publications go into your deck as well, and if you buy them early on, they act as "dead cards" that cannot be used to spell. So the strategy of the game is all about balancing your letter cards while still picking up the Publications you need to win.

Again, Paperback provides a great way to reinforce the words on your spelling list, particularly with middle-schoolers and older. Earning double cents for using relevant words is an easy addition to have students focus on the words at hand. Or you can go cross-disciplinary and award extra money or points for spelling words from other subjects, like "genome" from biology or "crusade" from history. Spelling "Renaissance" is an automatic win in my book.