Abstract Strategy Games are a genre of board games that should be on everyone’s game shelf. They usually support a variety of player counts, have very minimal reliance on luck, and almost always have a theme that’s family friendly. Here are 5 games other than Chess and Checkers you may want to try.

Abstract Strategy Games are a genre of board games that should be on everyone’s game shelf. They usually support a variety of player counts, have very minimal reliance on luck, and almost always have a theme that’s family friendly.

When it comes to abstract strategy games, Chess and Checkers are probably the most well known of the bunch. And while Chess has its fans, it can sometimes be intimidating to new players. Fans of the abstract strategy genre have a wealth of other options to choose from, so if you like the idea of a “thinky game”, but don’t want to dive down the Chess rabbit hole, here are 5 great abstract games that aren't Chess.

Onitama – Probably the most “chess-like” of the group,  Onitama is a game where careful planning can lead to great rewards. Your goal is to either capture your opponent’s Main Pawn or move yours to your opponent’s throne. The key is that 5 move cards are randomly chosen at the beginning of the game, of which each player has access to two of them at any one time (with the 5th card off to the side). After using a card, it gets replaced with that 5th card. 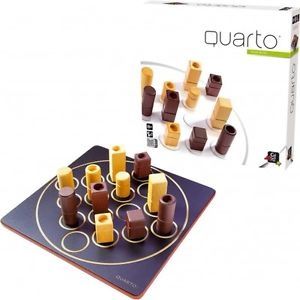 Quarto – This themeless game is probably the most abstract of the bunch. Quarto has you trying to create a row of 4 pieces that all share an attribute. Easy enough right? Not so fast, the wrinkle is you don’t get to choose what piece you will place on your turn, your opponent does! So while you might know what piece you want to place to win, a clever opponent will give you a piece that sets themselves up in a great position, not you!

Santorini – Not only is Santorini easy to learn and play, it looks great as well. Your goal is to get your builder to the 3rd level of Santorini. On your turn, you move your builder one space and build a piece. Winning Santorini requires careful planning, because your opponent is not only carrying out their own plans, but actively trying to throw a wrench in yours. One of the great things about Santorini though is how fantastic it looks on your tabletop and watching the city build up as you play. 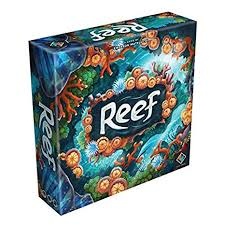 Reef – Reef has you building out a coral reef as the game progresses. On a player’s turn they can either choose to pick up a new card to add to their hand, or play a card they already hold. Every card gives you two pieces to add to your reef and a way to score points. Points are scored by having your reef match the patterns on the card you just played. Reef definitely falls into the category of simple to learn, yet complex to master. 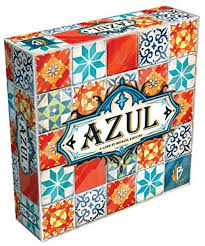 Azul – Probably the most complex game on this list, yet still accessible enough for family game night. In Azul, you are creating tile mosaics that will earn you points in various ways. Each turn has players drafting tiles from the different supply locations, and then later in the round, scoring points based on how well they crafted their mosaic. The smooth, plastic tile pieces that the players use give this one a great table presence, while the game play is addicting enough to have you coming back for more.