When it comes to adventure board games, Jaws of the Lion is one of the best. It has a wonderful narrative played over the course of several games, it fosters cooperation between the players, and it features an outstanding tuturial played out over the first several games to teach you how to play. Your family or board game group can't miss this one!

Gloomhaven: Jaws of the Lion is a cooperative dungeon crawler for 1 to 4 players. You and your band of adventurers, members of the famous mercenary group known as “Jaws of the Lion,” work cooperatively to solve the mystery of Gloomhaven’s disappearing citizens.

The original Gloomhaven is one of Kickstarter’s biggest success stories. It is also one of the biggest board games ever produced and, for some, one of the most intimidating as well. If this describes you, or if you want to dip you and your family’s toes into the world of Gloomhaven, Jaws of the Lion may be perfect for you.

First, Jaws of the Lion includes a Learn to Play Guide. This guide covers the first five scenarios. Each scenario introduces a new mechanism or two so that players can slowly learn how the game plays by playing the game instead of listening to rules being read to them. I LOVED this design decision. It really helped my wife, who normally shies away from dungeon crawlers, get into the game as she did not feel overwhelmed. 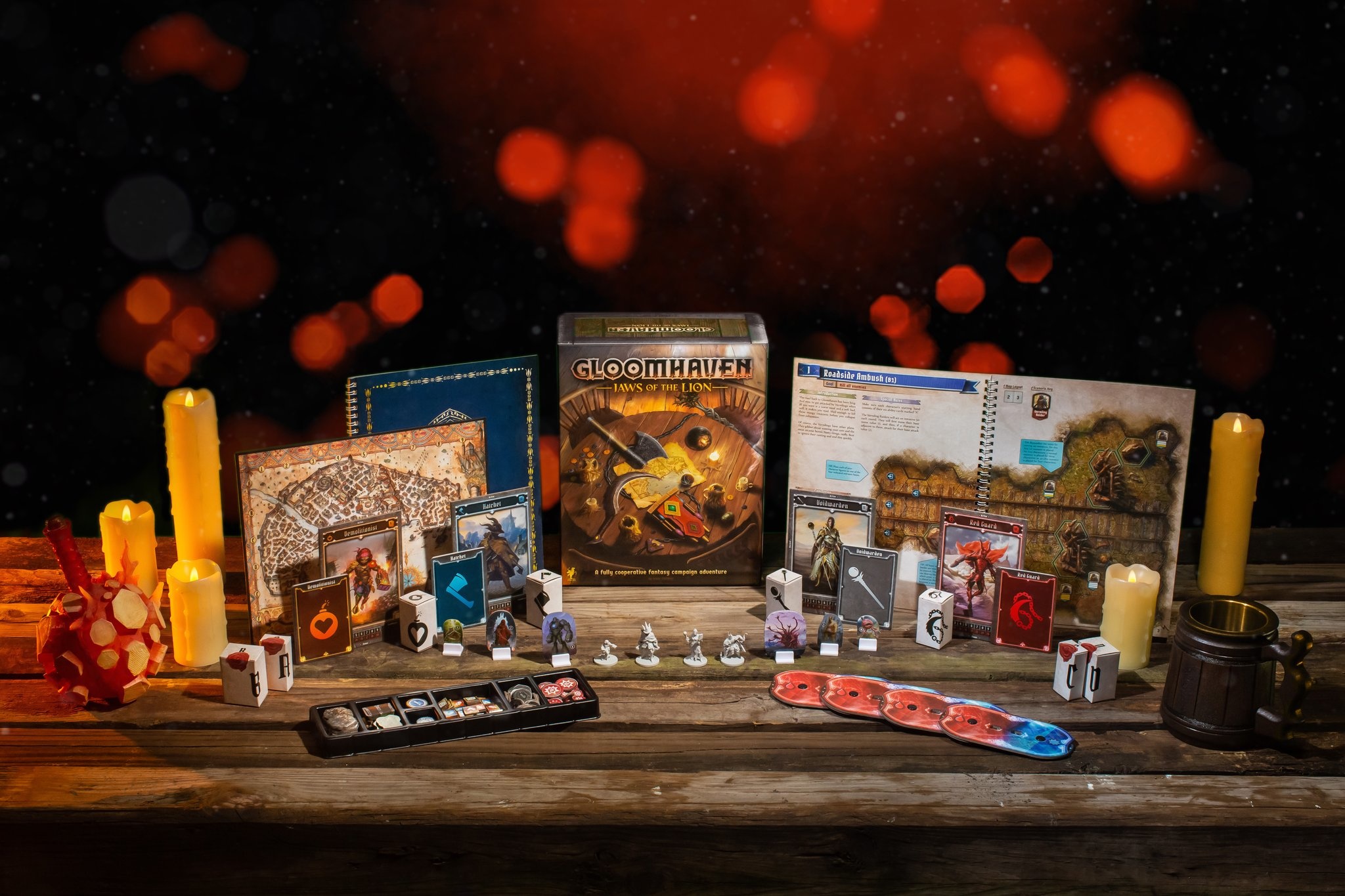 Second, the game expedites set up by having the maps, printed with gorgeous art, bound in a scenario book. You simply open to the scenario you are playing, place the monsters and tokens on the map as shown and you are ready to go. In addition, the scenarios are designed to accommodate different player counts by either removing monsters or upgrading them to elite versions depending on the number of players, so it works as well for couples as families of four.

This dramatically simplifies set up and tear down when compared to the original, which used tiles that you had to sort through to set up the map.

Third, the rules are streamlined compared to the original Gloomhaven. Many of the complicated status effects, stickers and modifiers were removed or simplified. I enjoyed Jaws of the Lion and, outside of not retiring and picking new classes (not present in Jaws of the Lion), I did not miss any of the gameplay that was changed. 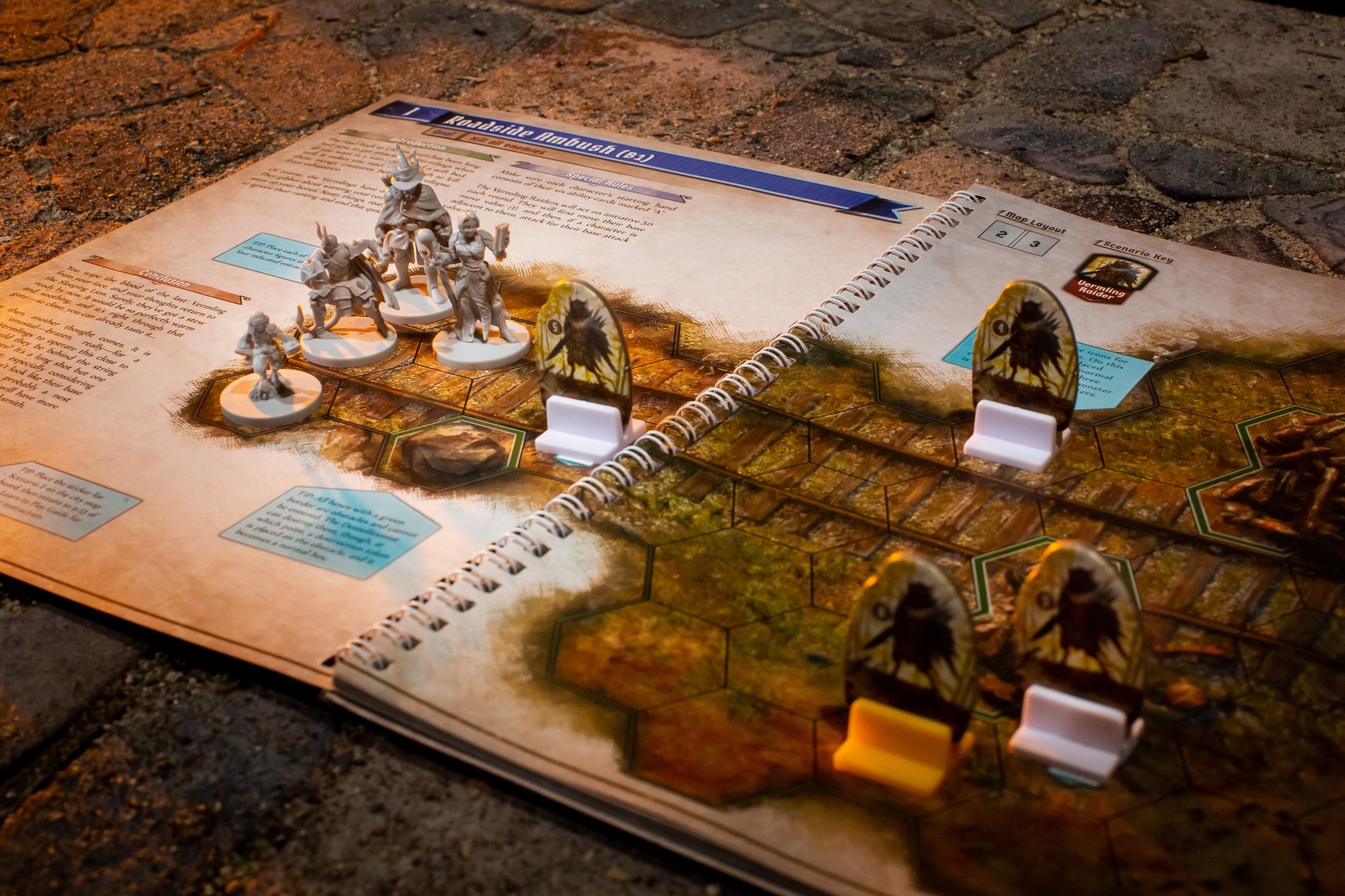 Finally, Gloomhaven: Jaws of the Lion retains the cooperative nature and card play of the original. While the game includes four new classes new to the Gloomhaven universe, you still use cards for all of your actions and resolving attacks. You pick two cards, play one for initiative and compare your initiative to other players and monsters. The player or monster with the lowest number goes first. If it is a player’s turn, they pick their actions for their two cards. If it is a monster’s turn, they follow the directions on their card. In between, players can discuss plans and work together to overcome the monsters. These turns are repeated until the party is either victorious or falls in battle. As a word of warning, the luck in this game comes from cards only; if you are looking to chuck dice, this game is not for you.

Jaws of the Lion is a cooperative dungeon crawler that should not be overlooked because it is a “simpler” Gloomhaven. If you are looking for a more complex game to play with your family, the smoother rules, which retain the original’s core gameplay, allow players to learn the game as the play and experience the wonderful world of cooperative games. We are happy to include this on our list of Fair Game Holiday Favorites, and we think you'll love it!