We are delighted to announce that we are making our very own board game! We are in the early stages of development, but we wanted to give you a sneak peak into some of the core concepts and how those might manifest in the end result.

Fair Game has always been a store focused on helping you create memories and foster relationships through tabletop games. We are always looking for the best ways to get you and your family and friends off of screens and actually making eye contact. We at Fair Game are taking this mission one step further…and into our own hands.

We are delighted to announce that we are making our very own board game! We are in the early stages of development, but we wanted to give you a sneak peak into some of the core concepts and how those might manifest in the end result. So buckle up!

In Gaming at Fair Game: The Board Game (GaFG:tBG for short, or “Gaff-ga: teh-Bigga” as we have started calling it), you and your friends will get to enjoy all the excitement of trying out the various games we have on our demo shelves while only learning one set of rules! Rolling dice like Tenzi? We’ve got that. Flipping over tiles in Carcassonne? Yeah, there’s that too. You’ll need to collect sets of like-colored cards like in Ticket to Ride or Trekking the National Parks to achieve your goals, and slap them down on the table at the right time like in Slapzi or Taco Cat Goat Cheese Pizza. There’s a lot going on here, so let’s take a look back at the goal of the game.

To win a game of Gaming at Fair Game: The Board Game, you have to make the most Memories. Memories are most often earned by winning challenges or turning in complete sets of cards. The Challenges span a breadth of activities that will be sure to get giggles out of both kids and adults! Simple challenges, such as folding a piece of paper or counting your toes, are easily attainable by younger games and will boost their confidence.

Those challenges also scale up to more complex ones, like calculating the necessary force and trajectory of getting a rocket into orbit, climbing a nearby building to get to a third story window, or changing the clock on a microwave. We are all about bringing people closer together, so we had to include the “Big Group Little Room” challenge as well, where all players must cram into the smallest room in the house. Bathroom, closet, pantry… it’s sure to get people out of their comfort zones! 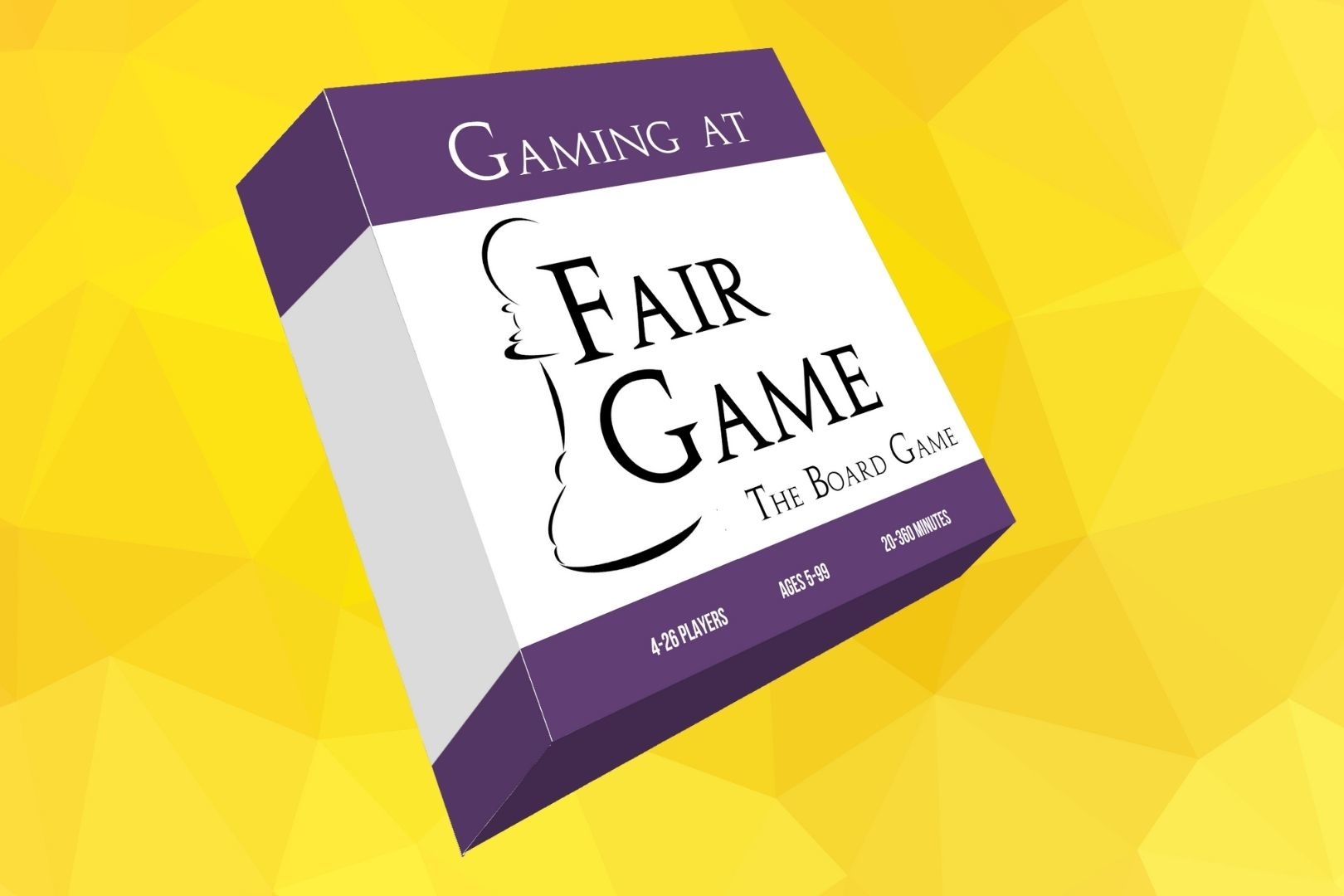 You can also turn in sets of cards to earn Memories. You’ll need to collect between 3 and 19 cards of the same color to turn them in, depending on where you are seated in the room. For example, if you’re closest to the kitchen, you can turn in a small set of cards, as long as you offer to get other players beverages while you’re up (even if you just sat down).

Each card depicts an object, animal, location, invention, historical figure, cultural reference, strange mannerism, abstract concept, or alien organism. In one of our playtesting games, I was quite delighted to turn in a set of orange cards: A traffic cone, Rex Grossman in a Bears Jersey, the concept of Punctuality, a faded polaroid photo of my dad from 1978, and a clementine. The artwork on the Punctuality card is especially good and very clearly illustrates what punctuality is.

There are still some kinks to iron out, but we are feeling confident about the game’s development so far. There are a few strange rulings we have to settle, like what to do if someone accidentally uses the Fair Game peanut butter included in the box for a sandwich. But don’t worry: we won’t rest until we have the best possible version of this game to release!

We also have plans to release a version on Kickstarter, which will contain 26 detailed miniatures and sell for $690. As an added stretch goal, we are going to put a wallet-sized school photo of David from 6th grade in each box. The deluxe Kickstarter version will also include an oversized cubic box to store all the expansions in. We do not have any expansions, but it is best to be prepared.

Thanks for joining us on this very exciting journey! We are hoping to have our game, Gaming at Fair Game: the Game ready to release sometime between July of 2022 and February of 2145. Hopefully we can pin down that release window as time gets closer. Until then, keep on making memories!