Mother's Day is right around the corner (May 9). We wanted to recommend a few games that you could play with mom to celebrate the holiday, and what better way to do so than by talking about games that our moms love!

Here are a few games that our magnificent mothers love ... and a few we look forward to introducing to them! 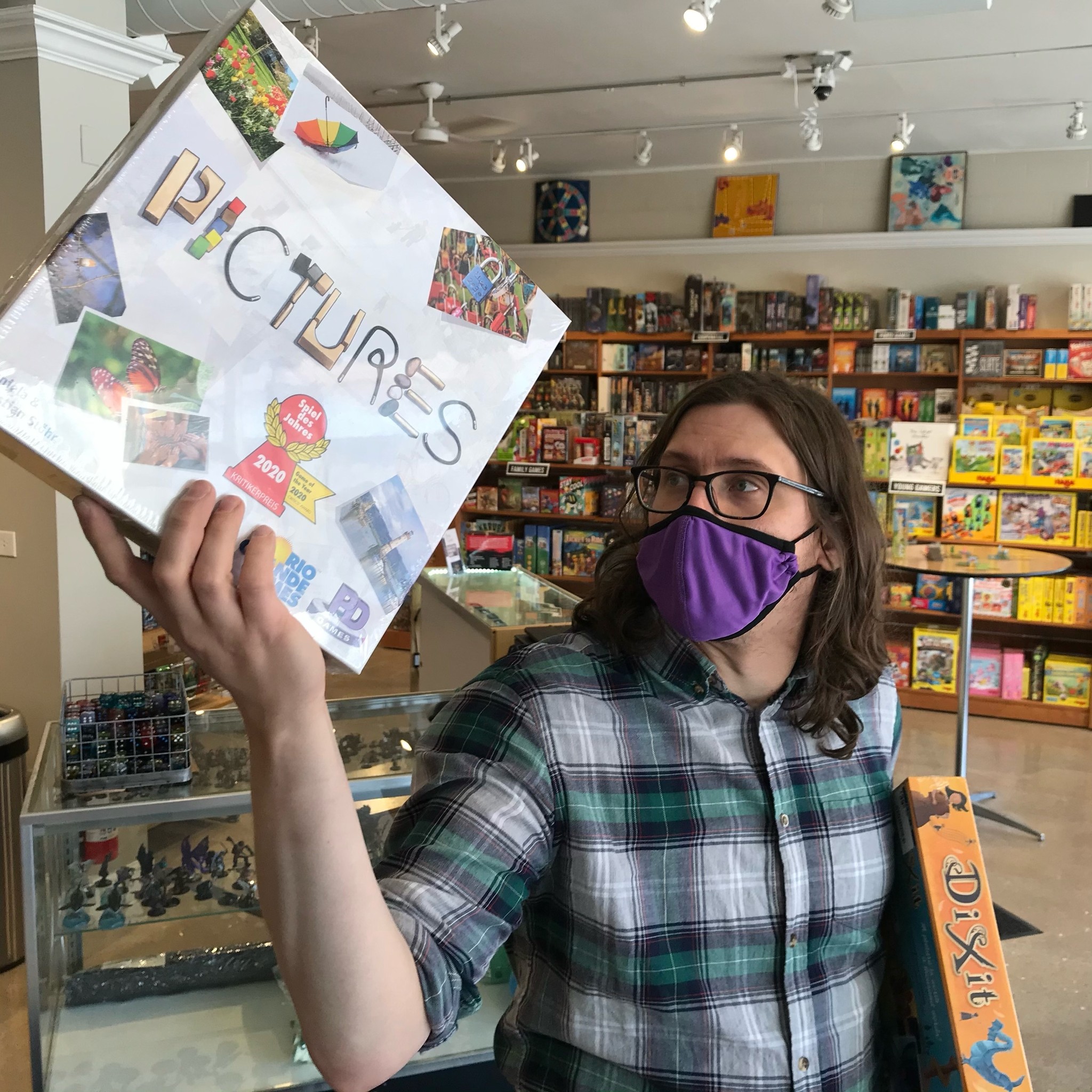 We have played Dixit at every family gathering for the last 3 or 4 years. In Dixit, players take turns concocting creative clues for various bizarre illustrations, and everyone else needs to figure out the illustration to which each clue refers. It's a casual game that relies on lateral thinking skills and social strategy. My mother enjoys staying one step ahead of everyone.

At this point, my family has a catalog of inside jokes, subtle and non-so-subtle references, and detailed strategies. My mother is always ready to play a round or two, and I am confident that she and the rest of the family will be stitches will laughter before the game is through.

What's Next? We have not been able to play a game together as a family for some time, but when we do get back to the table, I'm very much looking forward to introducing my mother to Pictures.

In Pictures, players lay out a grid of 16 different photographs. Your goal is to lead the other players at the table to guess one specific picture, but each participant has a different medium to help communicate with everyone else. One player has a set of building blocks. Another must arrange 9 colorful cubes. A third has a piece of string.

Dixit and Pictures have many similarities. Among them, they're both games that reward you for being clever. And I cannot think of anyone more clever than my mother. 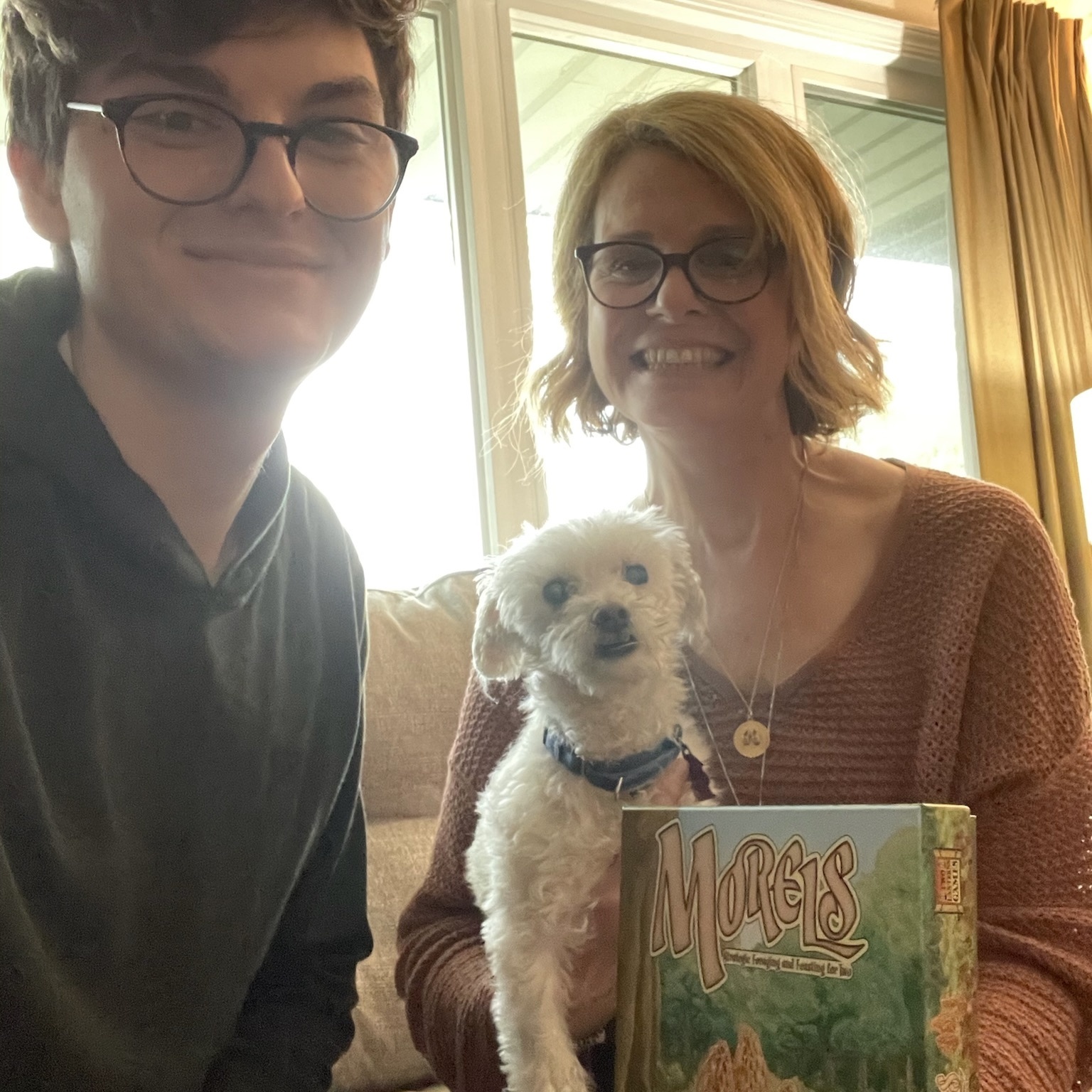 My mom and I like to play Morels. It has very few rules, but still interesting gameplay. The games are short and well-paced, which allows us to fit a game into a busy schedule.

What's on the table next? Tapeworm! I picked it up because it had such cute art and I knew my mom would love that. It feels a lot like Uno, but rather than stacking cards on top of one another, you build out a chain of them across the table. Each card represents a segment of one or more worms, and you must grow or chop the squirming tapeworms in order to empty your hand of cards and win the game. It's gross and adorable at the same time – perfect for my mom's sense of humor. 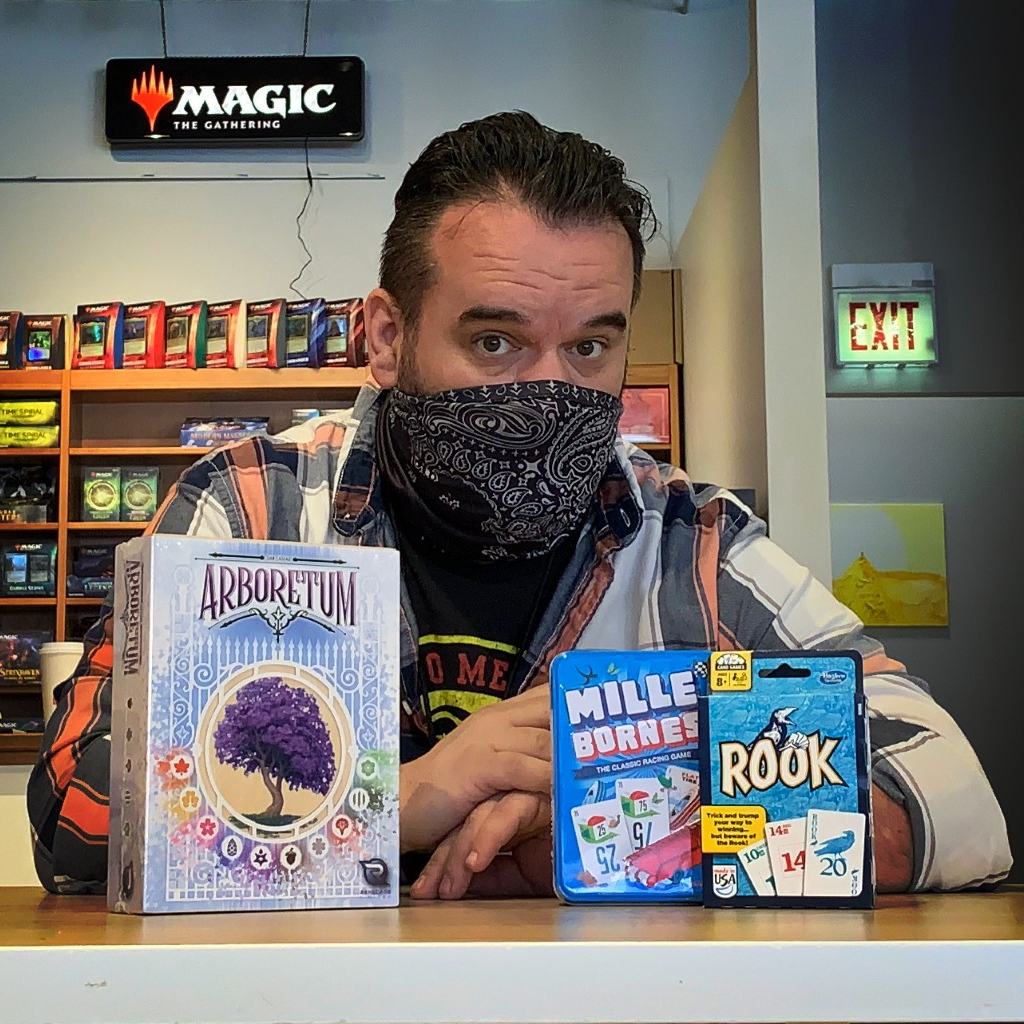 Growing up card games were really big at my house my mom loves a good card game. Card games are a great  way to sit around and make memories with your friends and family. There are so many games you can play with just a deck of cards and we played a lot of them … specifically canasta and tripoly (Michigan rummy). Two of the games I remember the most, are games we love here at Fair Game: Rook and Mille Bornes. Rook is a fun trick taking and bidding game. I remember feeling quite grown up when I was allowed to play it with my parent, aunts, uncles and grandparents. Mille Bornes is a fun racing game where you try to be the first to make it to 1000 miles.

What's Next? My mom lives a couple states away so it may still be a while before we get our next game in, but one game that I am interested in introducing her to is Arboretum by Renegade Game Studios. This is a fun card game with some interesting strategies. The cards are beautiful and it fun o see how each player chooses to build out their arboretum. I like it because it is unique and will make a great addition to the repertoire of card games we play when we get together with my mom. 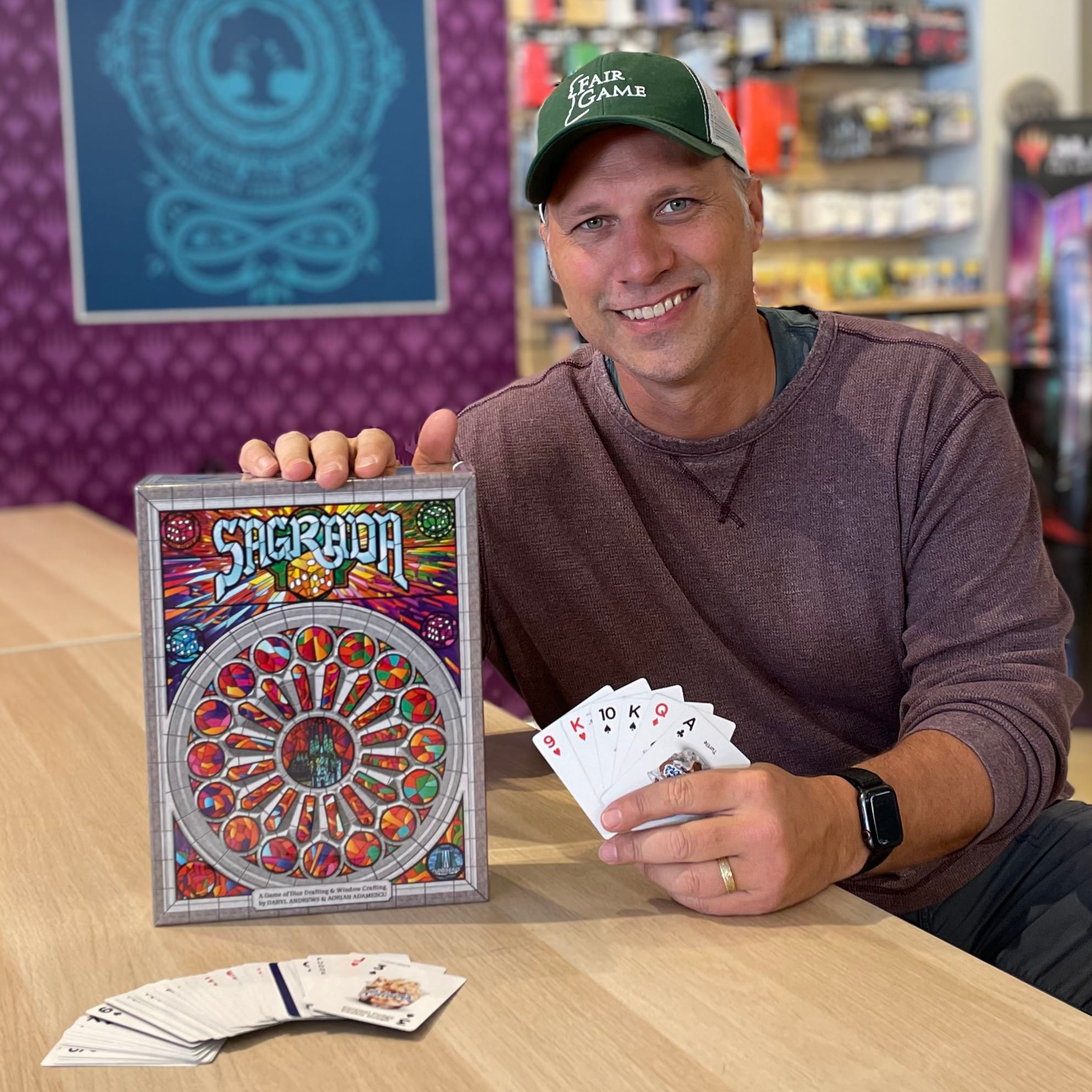 Growing up, we didn’t play a TON of board games as a family, but we did play our fair share of card games.  I have fond memories of my parents hosting their “Card Club” group over the years, mostly because it meant that there were TONS of tasty appetizers and snacks that I was able to grab a plate of goodies before retreating upstairs for the night ... but I digress. Pepper is one of the card games that I remember playing with my Mom most over the years. She’s a very competitive player, so it was always fun to play with her, whether we were on the same team or not.

What's next? My Mom is a BIG fan of puzzles. This past year was fun because I got to help her find some new jigsaw puzzles from Fair Game to complete (she doesn’t mind a challenge!) and whenever I visit I usually find a Sudoku book or two laying around that she spends time on.  That’s why the next time we get together, I’m going to suggest that we play Sagrada. It’s a game that has many Sudoku-like thinking elements, with each player is attempting to place dice each round onto their own 5x5 square board. But…. there are some restrictions (you can’t have the same color or number next to each other, for example) and point scoring is based on your ability to effectively manage building out your board over the course of the game.  It comes with a bunch of very colorful dice (who doesn’t like rolling dice?!?) and because the scoring goals change every game, it’s something that can be played over and over again. As an added bonus (especially for those who’s Mom’s enjoy a game of solitaire), it can be adapted to play solo if your oldest son isn’t around to beat you. (My Mom’s competitive streak seems to have passed to me…) 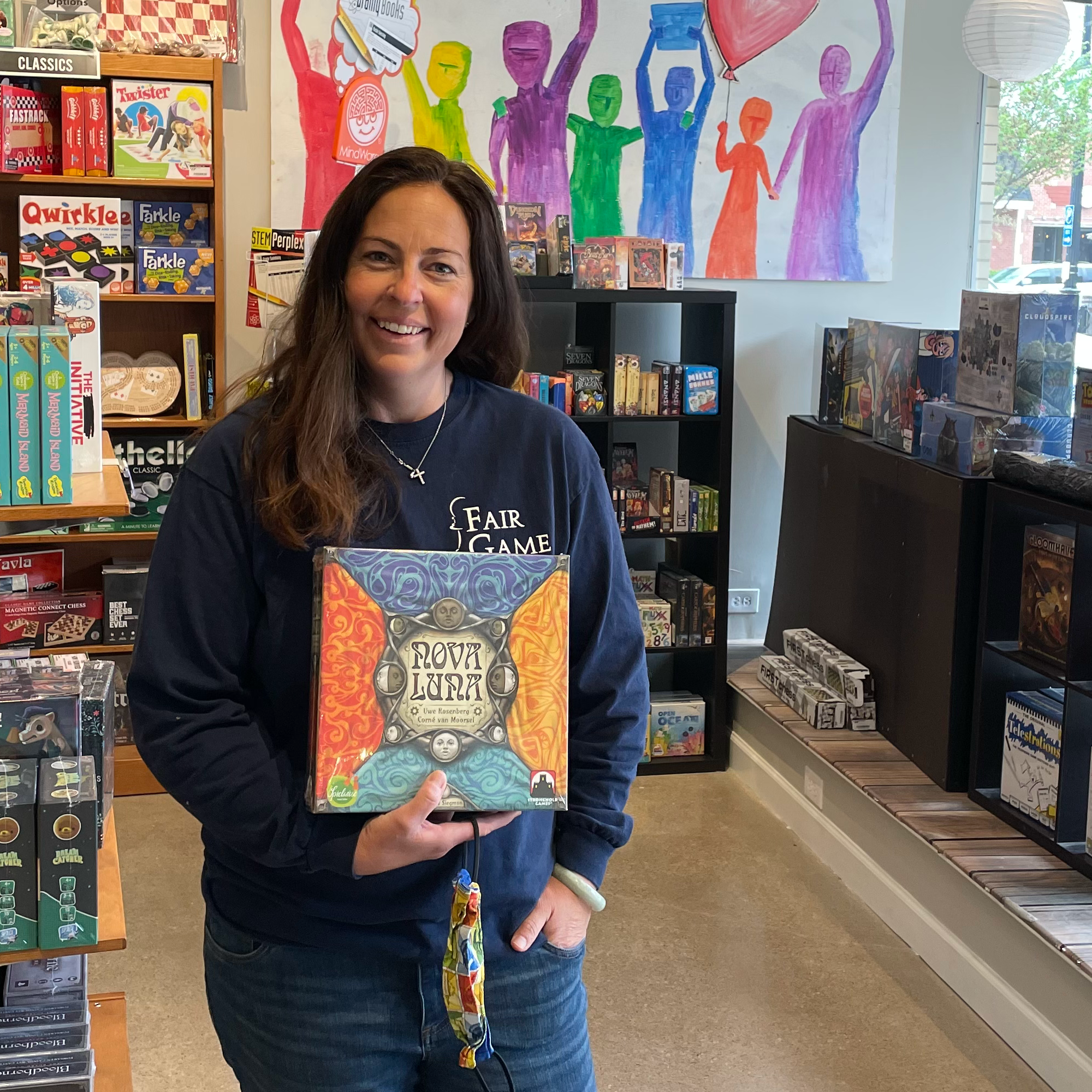 My Mom was always happy to play a game! The game that stands out in my mind is Double Solitaire.  She is the sweetest lady, but man, when she plays that game, she's fierce.  We have played it in every state I've ever been to with her, as it was always easy to pack two decks of cards! Thanks for those fun memories, Mama!

What's Next? If I could play a game with my Mom today, I would pick Nova Luna. I think it's beautiful (which she appreciates, as she's an artist!) and it is complex enough, while being easy to learn.