With the world continuing to become more dependent on digital technology, how can we help students develop programming skills? With games, of course!

Take a look around and it is easy to see the impact that technology is having on society and the benefits that can accrue to someone who is able to develop the skill set required to develop and maintain this digital world we inhabit. Computer Science is one of the most in demand professions today, so much that it is estimated that 1 million jobs in this area will go unfilled this year. Schools are doing what they can to support this skill development but there are a bunch of ways that we as parents/teachers/mentors can help facilitate the introduction and growth of programming skills in children as well.

Digital tools abound, but are there ways to practice these types of skills in a non-digital environment?  In fact, there are, and games provide a very rich opportunity to engage and practice many of the core elements needed to develop these skills.

The games we are going to suggest breakdown into two categories…..

Category 1 are the “obvious” programming games that are specifically designed and marketed as a direct way to practice these skills.

Category 2 are not “in your face” programming games, but in our opinion, do as good (or better!) of a job of developing some key skills and often in a way that is a LOT more fun to play and offers more variety.

More fun and variety = higher level of engagement (in our humble opinion).

We have played Code Master and Robot Turtles with my kids and enjoy them, although because they are so “programming forward”, in our opinion it takes away a little of the fun element.  They both do what they’re advertised to do and are nice introductions to programming, but it feels like a coding game. 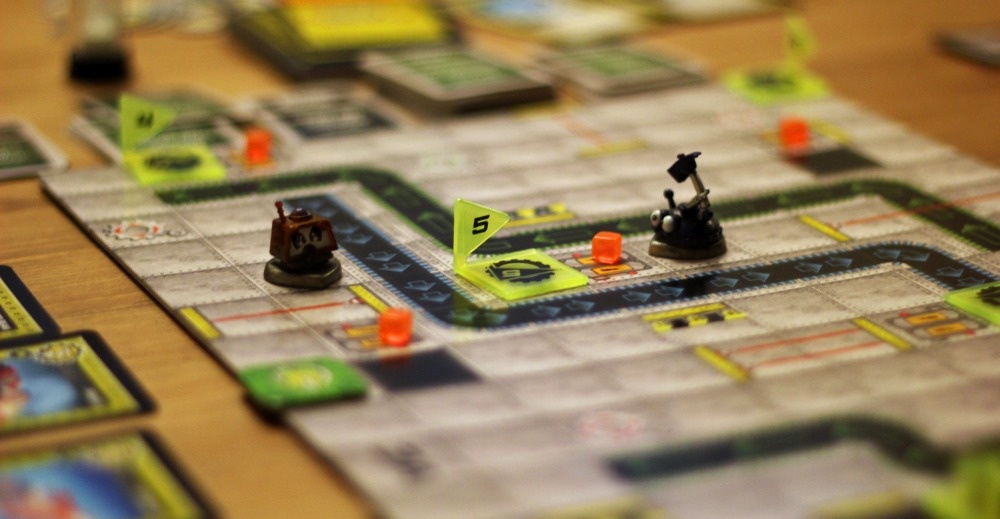 Robo Rally is a "heavier" game and does a better job of camouflaging the educational benefit and I think it could be very good in the 5/6th grade classrooms and something that will hold student’s attention for a bit longer.

Category 2 Games:  This is the area we get really excited about.  These games are fun games first and foremost, with very solid educational benefits that are not obvious but very real.

Games in this category:

- Boss Monster (Ages 10+): It's got a retro video game feel and is a very easy game to learn. Players are competing against each other to build dungeon rooms to lure adventurers looking for treasure. Each round players need to think about the available resources they have in hand and what combination of cards to play (and in what order) that gives them the best chance to win that round.

- Go Go Gelato (Ages 6+):  Each player starts with 4 ice cream cones, 3 scoops of ice cream, 2 hands and 1 challenge card. When the challenge card is flipped over, each player races to transfer the colored balls (ice cream) from cone to cone without touching them with their hands, attempting to be the first to match the pattern on the card. Lots of pattern building and thinking about which balls need to move to which cones first.  A couple really easy modifications would have the students solve the card and then write out line by line instructions on how they would tell someone to solve, having other students follow those instructions without looking at the card to see if end result matches, etc. 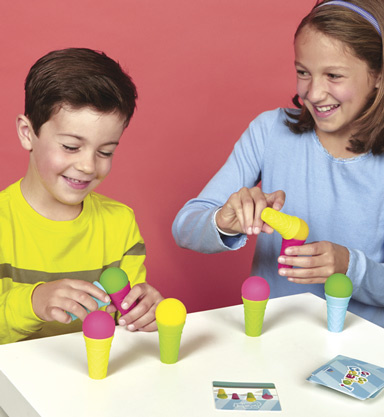 - Lunar Landing / Rush Hour (Ages 7+): Both games are logic puzzles where players select a challenge card and place the pieces on the grid as indicated before moving the pieces around to solve the puzzle.  Both of these can be modified to be cooperative games where you are working on teams.

- Ghost Blitz  (Ages 7+): Very quick learning pattern recognition game.  There are 5 different items, each with a unique color and shape that are placed in the middle of the table.  Players take turn flipping over cards and quickly identify either an exact match of one of the 5 different items or the item who’s shape or color is not represented on the card.

- Potion Explosion (Ages 8+): We like to introduce this game as “Candy Crush in real life!”. The basic game play centers players taking turns removing one colored marble, watching the other marble fall.  If you connect marbles of the same color, you get to collect them as well and use the marble to complete potions that score you points and also do special things throughout the game.  Pattern recognition is the key mechanism here, and getting an opportunity to create the chain reaction is unbelievably fun.

- Race to the Treasure (Ages 4+): This is a cooperative game where we work together to make a path from the start to the treasure, along the way collecting three keys that open the treasure’s locks before the Ogre gets there. It is a great introduction to tile placement games and the basic elements of logic. 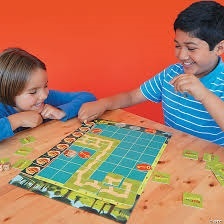 - Barenpark (Ages 8+): Players compete to create their own Bear Park using polyomino tiles they place onto a grid, attempting to use every square possible. What I like about this game is the emphasis on both sequencing but also on visualizing how the various polyomino tiles available might fit into the current space, while making sure you cover icons that allow you to secure new tiles and park sections.

- Blokus (Ages 6+): Tetris-shaped pieces are played on the board and the goal is to get as many of your 21 pieces on to the board as possible.  There is a lot that goes into sequencing of your actions….knowing (and thinking about) what your next several moves are likely to be is very important to success. I think you could utilize the pieces of the games for a variety of other activities similar to the graph paper programming lessons, but have the tactile benefit of the game pieces to use.

- Swish/Swish Jr (Ages 6+): A fast game to teach and play, but is one of the better games I have found to help develop pattern recognition skills.  Each transparent card has a combination of balls and hoops on it (in 4 different colors) and players try to create “Swishes” by spotting two or more cards that can be laid on top of one another in some manner so that every thing matches up.  Being able to quickly visualize and manipulate the cards in your mind is very important.

- Junior Labyrinth (Ages 5+): It’s a game that helps develop pattern recognition and pattern building skills.  The board is set up as a maze and players take turns using the one extra tile to manipulate the location of walls and treasures to allow them to move their player token along the path in order to acquire the treasure.

The list ended up being a little longer than we had originally planned (no surprise there!), and there were several other games that we wanted to include but just don’t have the space for.   We’d love to know what games you enjoy utilizing to bring out logic skills.

Swing by either of our locations to talk to your friendly Fair Game staff about the game that most interests you!