Bring home the experience of designing a dinosaur theme park and breeding your own exciting dinosaurs in a trio of brightly-colored strategy games.

When it comes to enjoying some dinosaur themed-board gaming, the first place many gamers will go is to the offerings from Pandasaurus Games. Over the years they have produced a trio of dinosaur board games, all clearly inspired from the Jurassic Park/World film series. Get ready for some "Rawrrr!" because today we are going to take a look at each of them and see which one would be the best fit for your gaming table.

The very first dinosaur-themed board game from Pandasaurus has you running your own dinosaur theme park. Instead of building out a sprawling park, the main focus here is on creating dinosaurs. Using a dice drafting mechanic combined with some worker placement, players will draft dice to gain resources (mainly Dinosaur DNA) and use those resources to create dinos for their park. Once in your park, the dinosaurs (awesomely crafted as dinosaur meeples) will not only add excitement to your park, but also threat. If your threat gets too high, watch out, because some of your guest might turn into a tasty dino snack. The game was also produced with a heavy 80’s vibe, so brace yourself for a splash of bright colors! 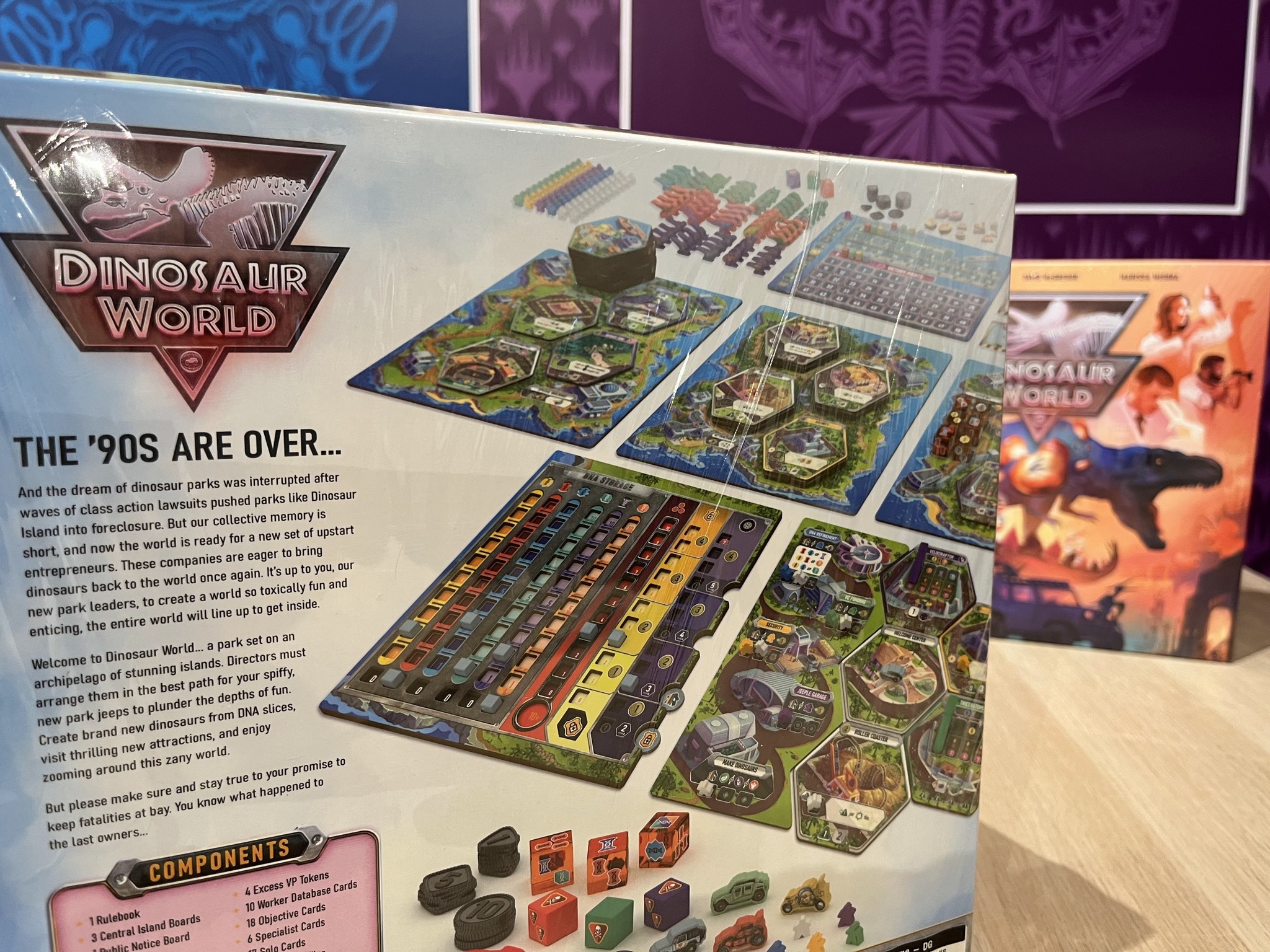 If Dinosaur Island was too much about collecting DNA and creating dinosaurs for you, then maybe you’ll like Dinosaur World better. This one is much more of a theme park builder than its predecessor. Instead of just dropping tiles on a grid for your park, you’ll actually be building out the park's map using large hexagonal tiles. Placement is also important here because throughout the game you’ll be taking your “Jeeple” on tours through your park. Take your guests on a tour through locations such as a T-Rex Paddock, welcome center, roller coaster, or a photo booth. Each will give you a specific benefit and hopefully some excitement for your visitors.

And speaking of excitement, the neat thing is that as your Jeeple visits different locations, the location’s excitement level decreases. Visitors don’t just want to see the same old dinosaurs over and over, so you’ll need to constantly be expanding your park to keep excitement levels high. Customers are so high maintenance! 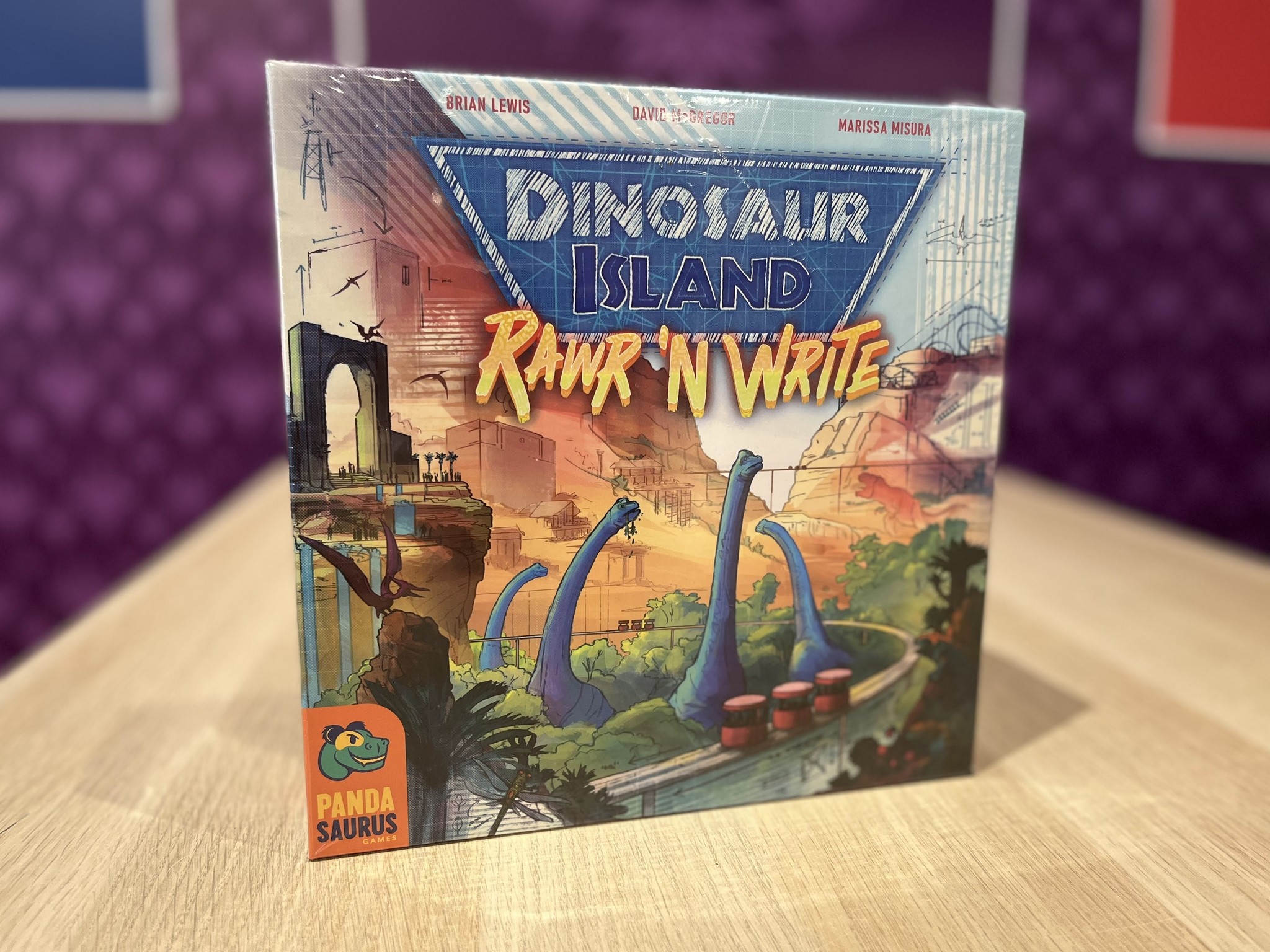 Dinosaur Island: Rawr N’ Write actually feels like a hybrid between Dinosaur Island and Dinosaur World. However, don’t let this roll-and-write game fool you into thinking this is some light filler game. There is a lot of dinosaur meat on the bone here.

Players will be using dual sheets to not only collect Dino DNA, but to also build out their park. Dinosaur Island: Rawr N’ Write uses the dice drafting from Dinosaur Island to earn money, DNA, and even threat from rampaging dinosaurs. Then players will use the DNA and money to create dinosaur attractions, rides, shops, and even to hire specialists. And borrowing a page from Dinosaur World, you’ll also be taking your visitors on a ride through your park, earning you bonuses along the way. If you are looking for a dinosaur themed board game, but want something that plays quicker than the two above, this one is definitely worth checking out. It’s honestly my favorite game of the bunch because it gives you the dinosaur theme park experience in a 30-minute play time.