This short list of instant classics make great gifts and even better activities for your family over the holidays!

It can be tricky to find activities that your whole family would love to do together. Often times the little ones can't keep up with the older children, and the adults don't want to play another "kids' game" with the youngest.

And so, in Fair Game's never-ending quest to bring you the best activities that everyone actually wants to do, here are three outstanding games (and some variation on the rules to get even more out of your experience) that are great for kids of all ages and their parents!

Everyone loves building with blocks, and Buildzi adds a unique structure to that activity that makes it fun for kids and adults alike. Buildzi is a huge hit with out in-store birthday parties because of the problem solving it imposes one what is otherwise a tangible, intuitive game.

The base rules of the game are straightforward. Each player has 8 Tetris-inspired blocks in front of them, and the top card of the blueprints deck is flipped over. It's a race to see which player can build that exact tower first! The speed element creates excitement and engagement, especially with younger kids. 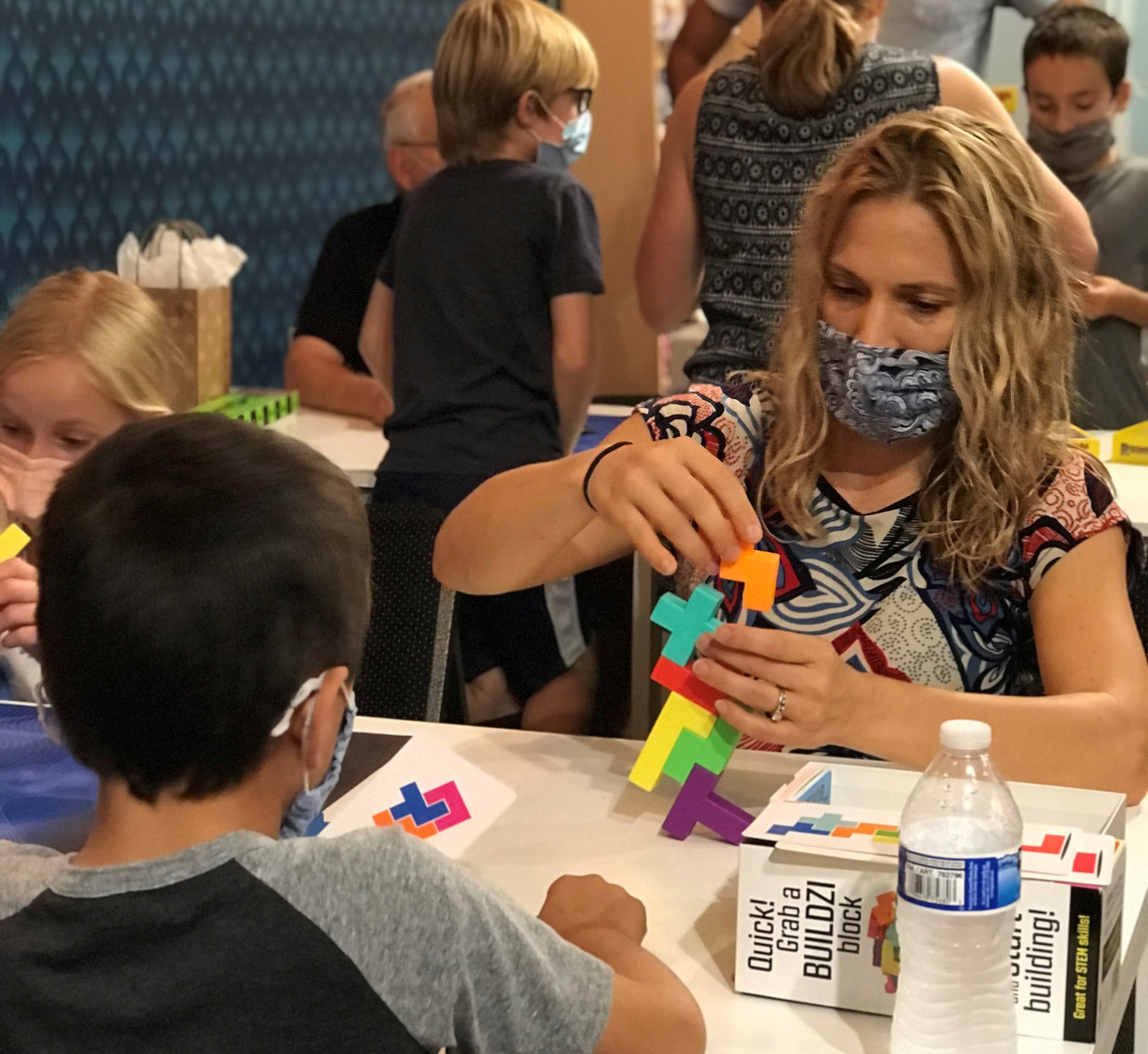 That said, there are a few ways to play Buildzi that we prefer. With the first Fair Game Variant, players pair off into two-person teams where one person is the builder and the other is the architect. Each architect gets the blueprint card, and the goal is for the builder to build the tower without ever being shown the blueprint. Architects must be creative and detailed in their explanations of how to orient the blocks, and all the goofy ways these towers go awry creates a lot of laughter at the table.

The second Fair Game Variant makes Buildzi a group cooperative game. Each of the 8 types of blocks is assigned to one of the players at the table. The objective is for the group to build four towers off of blueprints, but players may only touch the types of blocks they have been assigned. It is imperative to communicate which blocks are needed where and to request assistance holding towers while placing blocks, thus becoming a game about teamwork and communication above all else. This version is a fantastic bonding experience that goes over incredibly well with the parties we facilitate and we know it will be popular with your family too!

For those that enjoy deduction and word games, Just One fits the bill. This cooperative game will task players with trying to discover as many of the mystery words as they can. Players are trying to find just the right clue to communicate the mystery word, so Just One is awesome for growing children's vocabulary and practicing communication skills.

Each round, one player is the guesser and their teammates must each provide a one-word clue to help them identify the mystery word. However, players must be unique, because any identical clues will be canceled out! This means that players must walk the line of being clever in their clues, but not so obscure for them not to be helpful.

And finally, we have a game that develops creative writing skills and collaborative thinking, yet can be played by children as young as 4 or 5 years old! The idea is simple: players roll the 9 cubes and, one a time, use the images on the cubes to create a story. This is a game designed to help build your children’s creativity and problem solving in a fun and imaginative way. The diverse line of themes in Rory’s Story Cubes are good for breaking up writer's block, increasing player’s ability to find connections among the different images, and enhance their critical thinking. It’s not only a fun party game, but a developmental tool too!